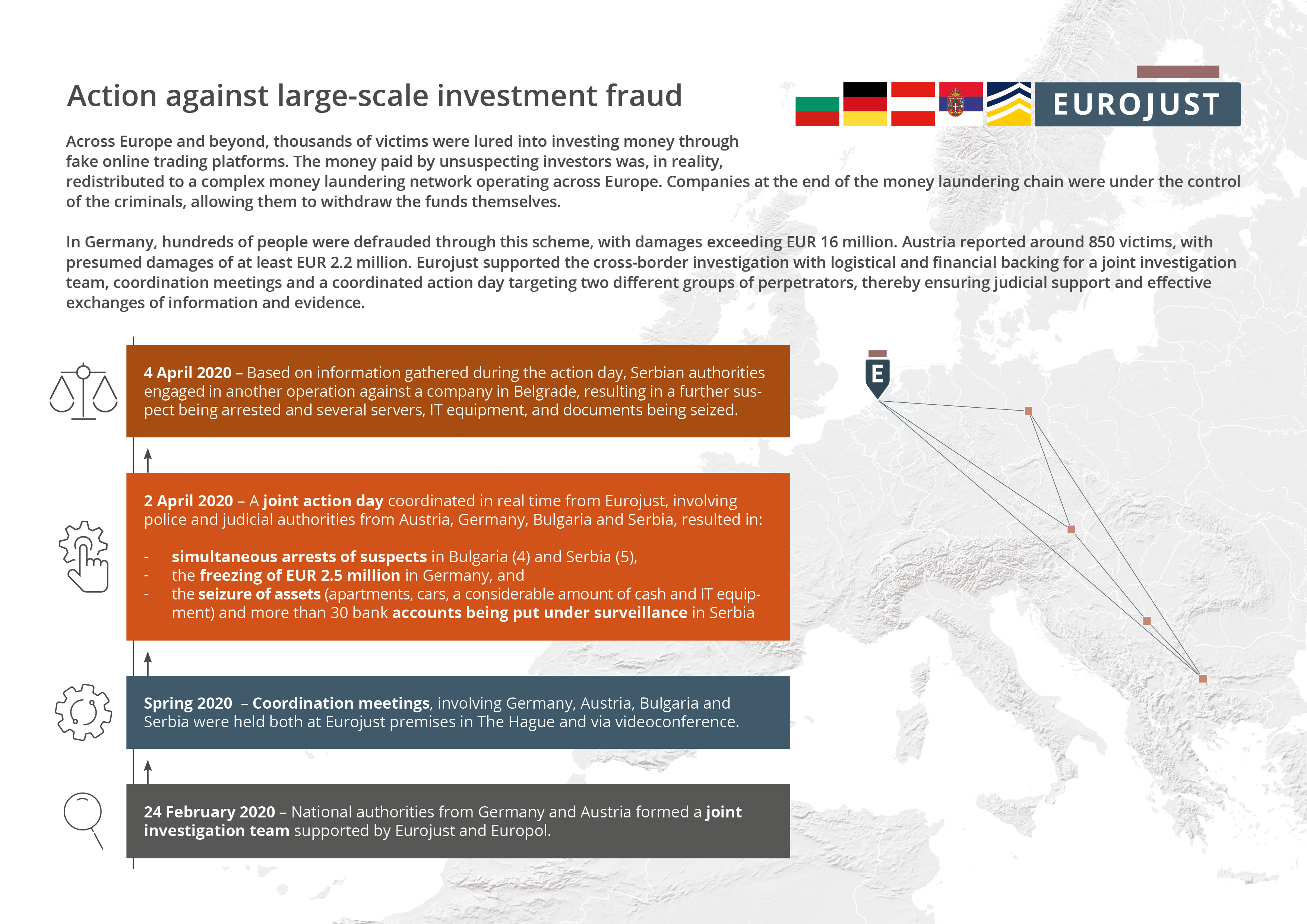 #JusticeDone for fraud with pension funds

#JusticeDone for fraud with pension funds

‘This is the result of excellent teamwork for a long time that has involved in principle all professional groups at the Swedish Economic Crime Authority as well as several qualified investigators from the Tax Crime Unit at the Swedish Tax Agency. All of them have worked hard to bring together the preliminary investigation, which concerns, among other things, transactions with foreign financial instruments and international payment flows. Our collaboration with authorities in other countries, Eurojust and Europol has also been of great importance for the success of the investigation.’

Jerker Asplund, Prosecutor at the Swedish Economic Crime Authority and Head of the Preliminary Investigation

In 2016, the Swedish authorities launched a criminal investigation into the suspected gross fraud of about SEK 2 billion in pension savings, which affected tens of thousands of individual savers and the Swedish State. Since it quickly became clear that the fraud scheme was organised at international level, the Swedish Desk at Eurojust opened a case. Since then, about 20 countries in and outside the European Union have assisted in the Swedish criminal investigations and a JIT was formed with Malta.

In 2020, a Swedish court convicted four people of involvement in the fraud scheme and sentenced them to a total of 21 years and 3 months in prison for the offences of gross infidelity against the principal, aggravated fraud, aggravated money laundering and aggravated bribery. Furthermore, approximately SEK 300 million was confiscated from those convicted. Another charge has been brought and a verdict for that part of the investigation is expected in early 2021.

In an operation in Hungary, Austria, the Czech Republic, Slovakia and Serbia in July 2020, coordinated by Eurojust and supported by Europol, the Hungarian authorities arrested two leaders of an OCG responsible for massive VAT carousel fraud involving the sale of sugar and cooking oil imported from EU Member States.

In total, 33 locations in five countries were searched, unravelling a two-year scam to avoid paying VAT to the Hungarian authorities, who consequently missed out on approximately EUR 10 million in revenue. The operation had no impact on the end-users of the sugar and cooking oil. In the run-up to the action day, Eurojust facilitated direct contact between the national judicial and law enforcement authorities from all five countries involved, helping to map out the criminal activity and providing translations and hands-on operational support.

Eurojust also supported the Hungarian judicial authorities with the execution of EIOs and other judicial instruments for the other countries involved, resulting in numerous witness hearings, house searches and document seizures executed outside Hungary.

During the action day, 11 simultaneous searches and 12 witness hearings took place in Austria, the Czech Republic, Slovakia and Serbia, in addition to 22 house searches in Hungary. Altogether, nine suspects were interrogated, two of whom were arrested, and real estate was seized. More than 110 officers were deployed in the operations on the ground.

In November, the Hungarian authorities dismantled an OCG engaging in large-scale VAT fraud through fictitious sales of perfume, with the support of Eurojust and law enforcement authorities in Austria, the Czech Republic and the Slovak Republic. During the joint action day, seven Hungarian suspects were arrested and several premises in Hungary and one in the Slovak Republic were searched. The authorities of the participating countries intervened through the timely seizure of relevant documents, enabling real estate and other proceeds of crime assets to be secured in Hungary. Eurojust supported the investigation by facilitating multiple judicial requests.