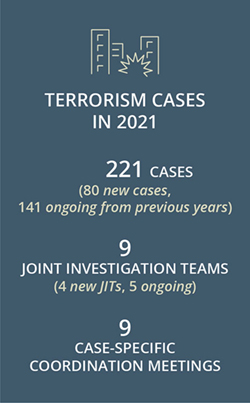 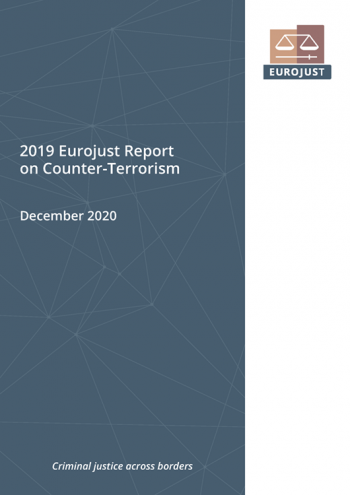 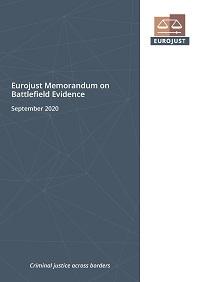 Experts on counter-terrorism meet at Eurojust

PUBLICATION DATE:05 April 2022
Eurojust’s 2021 meeting on counter-terrorism tackled topics ranging from addressing the dissemination of terrorist content online, left-wing and right-wing extremism and terrorism, the threat posed by prison leavers, and the use of battlefield evidence. The meeting brought together Eurojust national...

PUBLICATION DATE:21 September 2020
The 2020 Eurojust Memorandum on Battlefield Evidence reports on the present possibilities and experiences of using battlefield evidence in criminal proceedings in the EU Member States and non-EU countries. This report was produced following a recommendation from the EU Counter-Terrorism Coordinator...

PUBLICATION DATE:05 September 2019
Terrorism constitutes a major threat to security in the European Union. Horrific terrorist attacks since 2015 have killed and injured hundreds of innocent people and have left many more in shock and grief. Prosecutors and investigative judges play a key role in tackling terrorism. They are the...

PUBLICATION DATE:01 July 2018
The Terrorism Convictions Monitor (TCM) is intended to provide a regular overview of the terrorism-related developments throughout the EU area. The Monitor has been developed on the basis of open sources information available to the Case Analysis Unit and methodologies such as individual case...

PUBLICATION DATE:01 July 2018
The Terrorism Convictions Monitor (TCM) is intended to provide a regular overview of the terrorism-related developments throughout the EU area. The Monitor has been developed on the basis of open sources information available to the Case Analysis Unit and methodologies such as individual case...