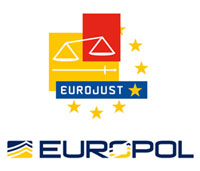 Today, judicial and law enforcement authorities from Denmark and Germany as well as Europol experts worked together to tackle down the key players of the OCG. The joint operation was the result of an 18-month coordinated investigation in the framework of a joint investigation team (JIT). The JIT, established with the support of Eurojust, provided the necessary mutual legal assistance and helped considerably to simplify the cooperation between the national authorities. Eurojust also supplied funding for the JIT.

During the operation, which involved the execution of numerous houses searches in Germany and Denmark, the main structure and modus operandi of the OCG were identified and several OCG members were spotted in Hamburg.

The OCG helped non-EU nationals illegally enter, and stay in, the European Union by providing them with stolen and falsified identification documents, tourist visas that allow the holder to stay in the European Union for a maximum of 90 days, and even residence permits. However, their ultimate goal was to arrange sham marriages of EU citizens with those non-EU nationals in Denmark so that they could then apply for and obtain permanent EU residence permits.

In some cases, the marriage ceremonies took place in Mexico or the USA. In those States, marriage by proxy (where one or both partners are not present) is allowed and recognised, and a third party may deputise for the aspiring partners and sign the marriage certificate on their behalf.

The suspects ran several marriage bureaus and used agents to attract and recruit EU citizens willing to marry the smuggled non-EU nationals for remuneration, without having the obligation to live with their alleged partners.

The OCG, which has been active since 2015, is known to have smuggled approximately 1 200 migrants into the European Union, charging up to EUR 13 000 per person for its services. Its members are suspected of having committed the crimes of migrant smuggling, document forgery, incitement and assistance to bigamy, as well as bribery.

Europol supported the joint operation on the spot by performing cross-checks and real-time analysis of the information and telecommunication data provided by Member States' officers. Eurojust and Europol supported the investigation from its early stages by facilitating the exchange of intelligence between the involved Member States, providing tailored analyses to the investigators and organising coordination meetings.