The Hungarian, German, Austrian, Slovakian and Latvian authorities, with the support of Eurojust and Europol, have this month undertaken a successful four-day operation against large-scale VAT fraud involving the sale of mobile telephones by an organised crime group (OCG) in Hungary. Hearings were conducted for nine suspects (with six suspects in pre-trial detention), 37 searches were carried out, and items with a value of EUR 7 million were seized, including cash, luxury cars, real estate, company shares and bank accounts. Unlawful VAT payments claimed from the Hungarian tax authorities, amounting to EUR 1 million, were blocked.

In this so-called Missing Trader Intra-Community (MTIC) fraud scheme, the alleged perpetrators purchased mobile telephones from several companies located in different EU Member States, using companies that failed to pay VAT on the sales in Hungary. The telephones were then sold through a chain of buffer companies to a Hungarian wholesaler, and rapidly exported at a lower, more competitive price, with the VAT being illegally reclaimed by the criminal organisation. The crime, which has resulted in an estimated loss of nearly EUR 13 million in Hungary, was committed since 2017.

To prepare for the joint action days, Eurojust facilitated and coordinated the investigative measures by forwarding European Investigation Orders and other information. Eurojust provided assistance in establishing direct contact between the domestic and foreign law enforcement authorities during the action days. It also checked for possible linked criminal proceedings. Europol held an operational meeting and deployed mobile offices during the action days.

The National Tax and Customs Administration started the investigation in Hungary, under the supervision of the Chief Public Prosecution Office of Baranya County. 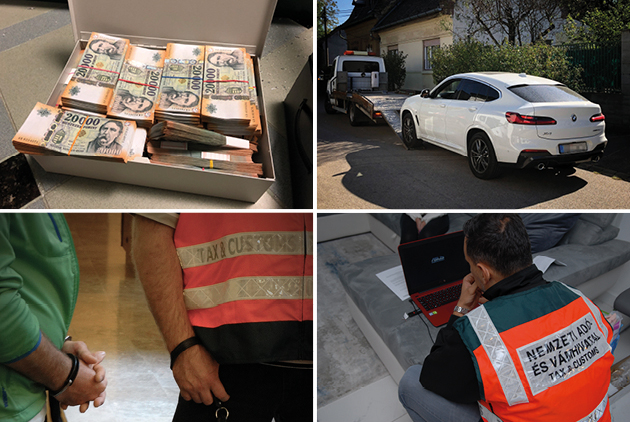