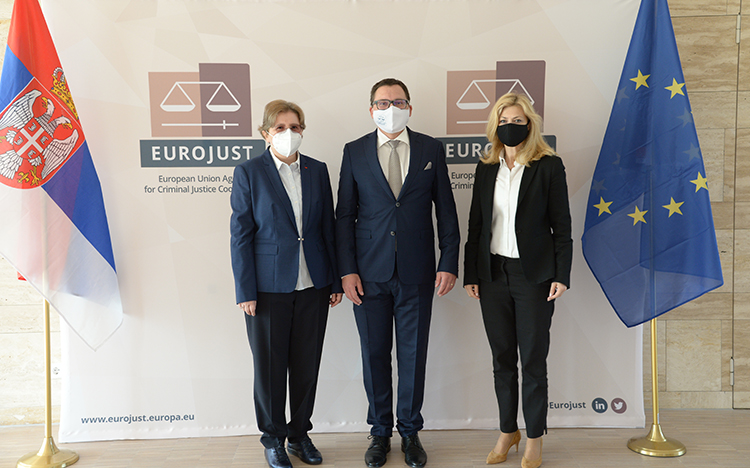 Serbia has considerably increased judicial cooperation with EU Member States in the first year since the appointment of the Serbian Liaison Prosecutor at Eurojust. The total number of newly registered cases with Serbian involvement at the Agency rose by 62.5% in 2020. Today, during the first evaluation meeting on the cooperation agreement, the Republic’s Public Prosecutor of Serbia, Ms Zagorka Dolovac, and the President of Eurojust, Mr Ladislav Hamran, expressed their great satisfaction with the implementation of the agreement.

Eurojust and Serbia signed a cooperation agreement on 12 November 2019. This led to the appointment of a Liaison Prosecutor at the Agency, Ms Gordana Janicijevic, who took office in March 2020. Despite the COVID-19 pandemic, a total of 65 new cases originating in or concerning Serbia were supported by Eurojust in 2020. This represents an increase of 62.5%. Last year, Serbia also participated in ten coordination meetings and two coordination centres. Twenty new cases with regards to Serbia have already been registered in 2021.

Eurojust President Mr Ladislav Hamran commented: ’Cooperation with countries outside the EU is an absolute necessity. Crime does not stop at internal borders nor at the external borders of the EU. The agreement with Serbia is an excellent example of how a trusted partnership enhances the efficiency of the fight against crime and how the security of both partners benefits.’

Both partners expressed their deep gratitude for the support of the IPA 5 Project in the implementation of this agreement.

The cooperation agreement foresees an annual evaluation meeting, which was slightly delayed due to the pandemic.

In addition to Serbia, nine other third states currently have Liaison Prosecutors at Eurojust: Albania, Georgia, Montenegro, Norway, North Macedonia, Switzerland, the United Kingdom, Ukraine and the USA. In March this year, the European Commission obtained a mandate to begin negotiations to introduce international agreements between Eurojust and 13 other third countries.

IPA 5 Project: the Instrument of Pre-accession Assistance (IPA) 5 cooperates with candidate and potential candidate countries to the EU since 2008, by developing and implementing technical cooperation projects financed by the Instrument of Pre-accession Assistance (IPA) of the European Commission. The ultimate goals of these projects are to familiarise the beneficiary countries with EU countries, and concern Albania, Bosnia-Herzegovina, the former Yugoslav Republic of Macedonia, Kosovo*, Montenegro and Serbia.

*This designation is without prejudice to the positions on status, and is in line with UNSCR 1244 and the ICJ Opinion on the Kosovo Declaration of Independence.