With organised crime increasingly operating on a global scale, the number of joint investigation teams (JITs) with third countries is growing rapidly. Up to September of this year, 78 JITs with countries outside the European Union were set up or continued their work from previous years. During the entire year 2020 this figure was 73, and when the new tool was first used in 2012 there were only two JITs with third countries. Cooperation with third countries is also the central theme of the 17th Annual Meeting of the Network of National Experts on JITs. 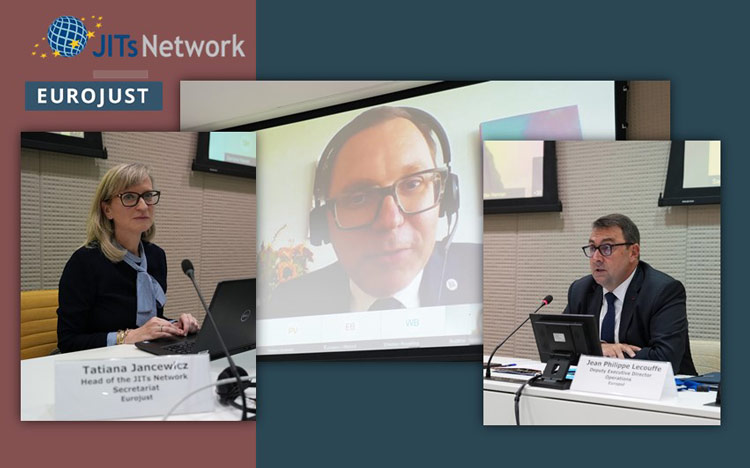 The meeting ‘Securing the EU beyond its borders: JITs with non-EU countries. New trends, challenges and opportunities’, hosted by Eurojust today and tomorrow, will discuss recurring issues, best practices and the way forward concerning JITs with the involvement of third countries. Particular attention will be given to the tools available for practitioners to join forces with countries outside the European Union to effectively counter transnational organised crime groups (OCGs).

In the meeting, the role the JITs Network, as well as Eurojust and Europol, can play in this process will be a major topic, including the role of Liaison Prosecutors* posted at Eurojust. The event will be opened by Eurojust President Mr Ladislav Hamran and Europol Operations Deputy Executive Director Mr Jean-Philippe Lecouffe Lecouffe and chaired by Tatiana Jancewicz, Head of the JITs Network Secretariat.

During the meeting, prosecutors from Italy, Albania and Austria, among others, will present case examples of successful cooperation in JITs with third countries, with the European Commission providing an update of the state of play on the JIT Collaboration Platform. Furthermore, the need to ensure appropriate data protection in the light of JIT cooperation with countries outside the European Union will be addressed.

The COVID-19 pandemic has reinforced the trend of expanding global crime as our lives shifted to online platforms, enlarging the scope of OCGs for cross-border criminal activities. In response, JITs prove to be good operational instruments, as they provide for more options than other mutual legal assistance (MLA) tools that can lead to cumbersome and lengthy procedures.

The JITs Network is composed of at least one expert per Member State, who acts as contact point for national authorities, such as prosecutors, investigative judges and investigators from law enforcement authorities. They all have long-standing expertise in the functioning of JITs and can provide information on the practicalities of setting up teams with other countries.

JITs are one of the most advanced cooperation models used in international judicial cooperation in criminal matters. A JIT agreement between competent authorities of two or more Member States and/or third countries is the basis for such a team carrying out criminal cross-border investigations. JITs are set up for a limited period and are composed of prosecutors, law enforcement representatives and judges who decide to work together on a common case. Eurojust can provide funding for JITs and hosts the Network’s Secretariat.