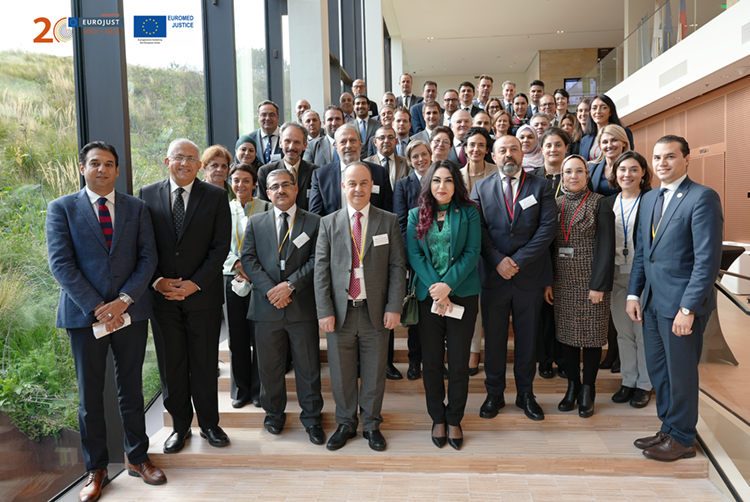 The 4th EuroMed Forum of Prosecutors General brought together high-level public prosecution officials from all European Union Member States as well as from Algeria, Egypt, Jordan, Lebanon, Morocco, Palestine¹ and, for the first time, Libya. The forum participants discussed the 2022-2025 Cross-Mediterranean Strategy, with the aim of deepening collaboration and developing shared perspectives to fight cross-border crime.

The event was opened by Eurojust President Mr Ladislav Hamran, together with Mr Peter Csonka, Deputy Director for Criminal Justice in the Directorate General Justice and Ms Morgane Buttiens, Project Officer in the Directorate-General for Neighbourhood and Enlargement Negotiations of the European Commission. Eurojust hosted the meeting at its premises in The Hague on 12-13 October 2022.

The Prosecutors General assessed the progress made and discussed the next steps for the implementation of the 2022-2025 Strategy and Action Plans aimed at countering trafficking in human beings and smuggling of migrants and the confiscation of crime proceeds and assets recovery within the Mediterranean region. These plans were adopted in the 3rd EuroMed Forum of Prosecutors General in November 2021.

The Forum was preceded by a meeting of CrimEx, the expert group in judicial criminal matters of the EMJ programme, which provided additional input to the discussion.

The EuroMed Forum of Prosecutors General represents a key step towards improving judicial cooperation between EU Member States, South Partner countries and Eurojust. It is also the cornerstone of a much-needed high-level interregional mechanism for consultation and dialogue.

The event also provided an opportunity for the officials to hold bilateral meetings with representatives of other delegations, as well with Eurojust’s President, Eurojust National Members and Liaison Prosecutors.