The Prosecutor General of Estonia, Mr Andres Parmas, has discussed the continued cross-border cooperation of his judicial authorities with Eurojust during a visit to the Agency today. In a meeting with Vice-President Mr Boštjan Škrlec, the relations between Eurojust and the new European Public Prosecutor’s Office (EPPO) were another main point of discussion, as well as future developments at the Agency and the continuation of operational activities during the COVID-19 pandemic. Mr Parmas also visited the Estonian National Desk at Eurojust, headed by National Member Ms Laura Vaik. 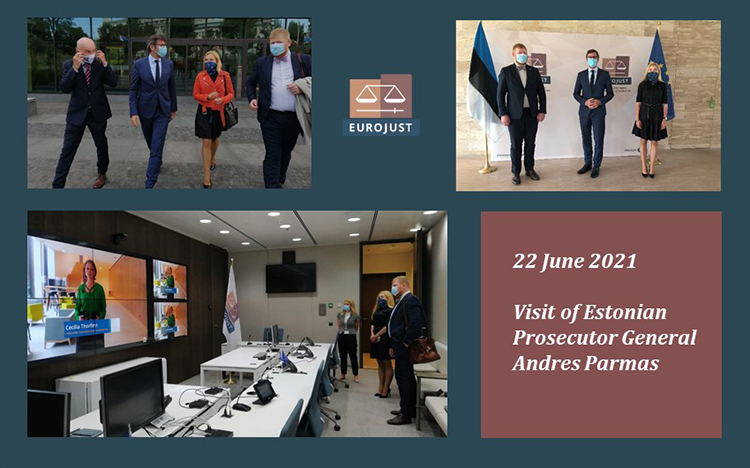 The visit of Mr Parmas to Eurojust was the first since his appointment as Prosecutor General in February last year. The Prosecutor General was informed of the increasing caseload at Eurojust, which rose last year by 13 % to 8 800 in total. Estonia has been involved in 302 cases for cross-border judicial cooperation between 2017 and 2020, of which 117 were opened to other Member States by the Estonian National Desk. Since the start of 2021, this concerns 51 cases, of which 18 were opened by Estonia.

During his visit, Mr Parmas got detailed information on the Working Arrangement between Eurojust and the EPPO, which was signed in February this year and has led to the establishment of institutional relations. The EPPO started its operations this month. During the visit, future developments at Eurojust, its main role to roll out the project Digital Criminal Justice and the continuation of operational activities during the COVID-19 pandemic were also discussed.