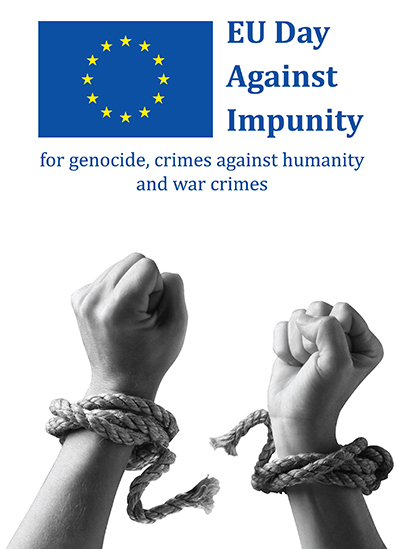 EU Member States are giving more priority to investigating genocide and war crimes. The number of new cases rose by a third over the last three years, with 1 430 new investigations launched in 2018. This stark increase will be one of the major topics of discussion today at the 4th EU Day against Impunity for Genocide, Crimes against Humanity and War Crimes, organised by Eurojust, the Romanian EU Council Presidency, the European Commission and the Genocide Network. Eurojust, the EU's Judicial Cooperation Unit, hosts the Secretariat of the Genocide Network, which started its work exactly 15 years ago.

Ahead of the event, Eurojust's President Ladislav Hamran stated: 'It is very encouraging to see that EU Member States are increasingly taking up their responsibilities and prioritising prosecution of genocide, war crimes and crimes against humanity. The European Union is an area of security and justice and we cannot and will not be a safe haven for whoever has committed these atrocities anywhere in the world.'

In 2018, a total number of 2 943 cases regarding genocide, crimes against humanity and war crimes were pending or ongoing, which is the highest number documented since the creation of the Genocide Network. These cases concern crimes committed worldwide.

The Genocide Network provides a forum for practitioners to exchange information on ongoing cases and share expertise and best practice for the investigation and prosecution of perpetrators of international crimes. Further, the Genocide Network is dedicated to raising awareness of the crimes of genocide, crimes against humanity and war crimes, thus proving the EU's commitment to fighting impunity of suspected war criminals.

Since the establishment of the Genocide Network, increased action has been taken in the area of international criminal justice. Eurojust, Europol and EU Member States deal with these crimes as key priorities and are stepping up their efforts as well. Moreover, the new legal basis of Eurojust provides it with more power to engage in fighting impunity and bring to justice perpetrators of these crimes.

In 2016, 1 073 new investigations into international crimes were initiated in the 28 EU Member States. This figure rose to 1 233 in 2017, with a further increase to 1 430 in 2018. This trend shows not only the commitment of more and more EU Member States to join the common fight against these crimes, but also the rising impact of armed conflicts in the proximity of the European Union.

With regard to Syria, for instance, France and Germany serve as an example by having set up a joint investigation team (JIT) for war crimes and crimes against humanity committed by the regime in this country. The JIT is financially and operationally supported by Eurojust, showing the strong effort made by the European Union to target impunity.

The 4th Day against Impunity for Genocide, Crimes against Humanity and War Crimes, which was organised with the contribution of the Romanian Embassy in the Netherlands, coincides with the 70th anniversary of the adoption of the four Geneva Conventions. Today's event will start with a keynote address, which will be delivered on behalf of HE Ms Ana Birchall, Deputy Prime Minister for Romania's Strategic Partnership's Implementation, and interim Minister of Justice, keynote speeches by Mr Ferd Grapperhaus, Dutch Minister of Justice and Security and Ms Fatou Bensouda, Prosecutor at the International Criminal Court (ICC) in The Hague, as well as a video message by Ms Vera Jurová, Commissioner Ms Vera Jourová, European Commissioner for Justice, Consumers and Gender Equality.

The speeches will be followed by a panel discussion with HE Mr Mika-Markus Leinonen, Ambassador, EU Liaison Officer in The Hague, European External Action Service, Ms Olympia Bekou, professor of public international law and head of the International Criminal Justice Unit of the University of Nottingham, UK, Ms Nicole Vogelenzang, head of the International Crimes Unit, National Prosecution Office, the Netherlands, Ms Iulia Motoc, judge at the European Court for Human Rights, Strasbourg, and Ms Virginie Amato, Europe regional coordinator, Coalition for the ICC. The panel will be moderated by HE Ms Brându?a Predescu, Romanian Ambassador to the Netherlands.

The event will commence at 15.00 at Eurojust.