Greek and Italian authorities, with the active support of Eurojust and Europol, have arrested eight suspects for the organised smuggling of irregular migrants across the southern Adriatic Sea, using small leisure boats. Approximately 140 migrants were transported from November 2018 until recently from the west of Greece via the Strait of Corfu to the southern Italian coast between Otranto and Lecce. Migrants, including minors under 13 years old, paid up to EUR 6 000. The journeys took up to 12 hours in boats that were sometimes less than 10 metres long. The arrested suspects, of Italian, Greek and Middle Eastern origin, are suspected of the facilitation of migrant smuggling or attempts to smuggle migrants. During the operation, 13 searches took place, and nine migrants, including minors, were found, who were ready to be transported by the smugglers.

Vice-President of Eurojust and National Member for Italy Mr Filippo Spiezia said: 'Tackling migrant smuggling is one of the priorities for Eurojust to enable a good coordination of actions, as we have been able to do in this case. At a time when Greece faces a strong migratory pressure, we have to combine efforts and as EU agencies support the effort of national authorities to combat criminal organisations that exploit migrants.'

National Member for Greece Mr Paris Adamis stated: 'Cross-border cooperation is essential to tackle migrant smuggling and exploitation of people, and I would like to thank everyone involved for this successful operation. We stand ready to support national authorities in their combined efforts to take on this type of organised crime.'

The arrests took place during an action day coordinated by Eurojust. A joint investigation team (JIT), financially supported by Eurojust, was set up in March of this year at the request of the two Member States to help with the investigations. This JIT was the first between Greece and Italy to investigate a case of migrant smuggling. Eurojust earlier this year actively called on national authorities to set up JITs for this purpose. In addition, two coordination meetings to exchange information and evidence were held at Eurojust.

Representatives of the European Migrant Smuggling Centre and Joint Operations Team-MARE of Europol participated in the action day. Europol actively supported the operation by providing intelligence and the sharing of information. 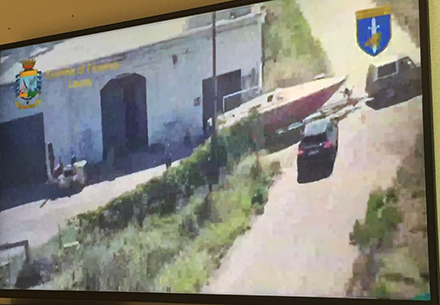 The operation was led on the ground and concluded in Italy by the Public Prosecutor's Office (PPO) of Lecce, the National Anti-Mafia and Counter Terrorism Directorate and the Guarda di Finanza, and in Greece by the PPO in Athens and the PPO of the Court of Appeal in Athens, the Greek judge for matters of Mutual Legal Assistance and the Hellenic Police and Hellenic Coast Guard.

For yesterday's press release on migrant smuggling, use this link.