An ancient and rare collection of almost 800 Apulian archaeological artefacts and pieces of pottery has been returned to Italy from Belgium, with crucial support from Eurojust. The archaeological goods illegally obtained by a Belgian art collector had been excavated without authorisation in Puglia, Italy. The collection, which dates as far back as 600 B.C., includes a rare Daunian stele, or funerary artefact, that had been shown at expositions in Paris and Geneva. Eurojust ensured the judicial cooperation between the two countries for the collection to return to the Puglia region. The collection has a preliminary estimated value of EUR 11 million. 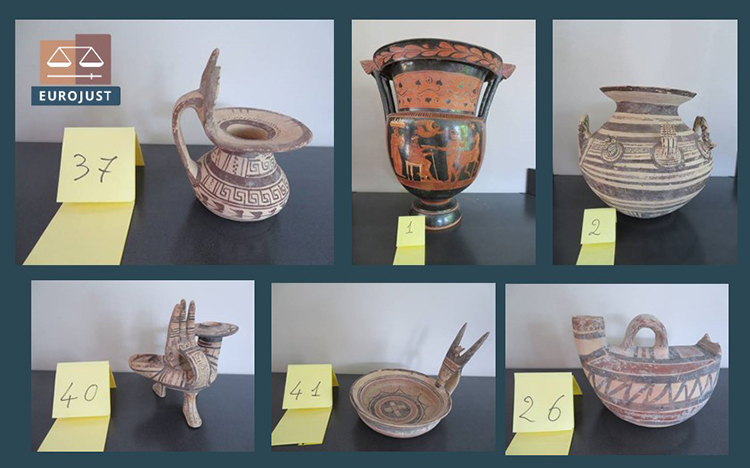 Investigations started in 2017 and were carried out by the specialised unit for Protection of Cultural Heritage Goods of the Italian Carabinieri under the direction of the Public Prosecutor’s Office (PPO) of Foggia. They managed to identify a Belgian collector who possessed the Daunian tombstone with decorative features specific to the archaeological area of Salapia, close to Foggia. It had been shown at various expositions in Geneva and Paris in the previous years.

The stele or tombstone showed some missing features such as a decorative inscription that was kept on display at the Archaeological Museum of Trinitapoli, close to Barletta in Puglia. The missing part enabled authorities to make a link to the artefact displayed during the expositions and led to the Belgian collector.

At his premises, the investigators found the main part of the tombstone and were able to match this to the parts displayed in the Italian museum. During the investigations, a further vast collection of illegally excavated artefacts and pieces of pottery was found, dating to between 600 and 300 B.C..

Eurojust established the judicial cooperation between Italy and Belgium and assisted in the execution of European Investigation Orders at the request of the Foggia PPO. This enabled the entire collection found in Antwerp to be returned to Italy, where it has now been presented, despite several attempts by the Belgian collector to repeal this transfer. Further investigations, as well as examinations by archaeological experts, into the collection will be completed in Italy.

Support to the operation was provided by the PPO and Judiciary Police of Antwerp in Belgium.