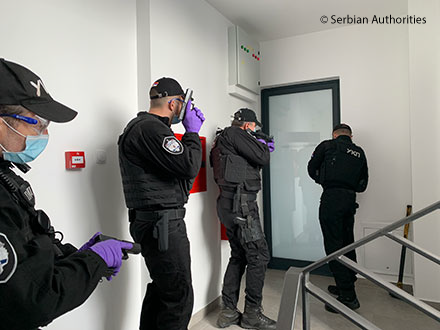 With the support of Eurojust, authorities in Austria, Bulgaria, Germany and Serbia have successfully carried out operations against two organised criminal groups (OCGs) suspected of large-scale investment fraud in cyber-trading. In spite of the challenges of the current coronavirus crisis, an action day took place on 2 April, with all participants adhering to the measures imposed to prevent further contagion. During the first operation, four suspects were arrested in Bulgaria. In Germany, EUR 2.5 million were frozen on the bank account of a company involved in the fraud scheme. The Serbian authorities arrested five suspects and searched nine places, seizing five apartments, three cars, a considerable amount of cash, and IT equipment. Additionally, more than 30 bank accounts were put under surveillance. Based on the information gathered during the action day, authorities engaged in another operation against a company in Belgrade on 4 April, arresting one suspect and seizing servers, other IT equipment, and documents. Eurojust, the EU Agency for Criminal Justice Cooperation, actively supported the judicial cooperation and coordination. Europol provided information exchange.

The operations were part of an ongoing long-term investigation conducted by several national authorities. According to the investigations, the OCGs lured thousands of victims in several countries into investing in non-existent financial products. Throughout Europe, advertising banners and mass emails promising above-average profits encouraged investors to register on unlicensed online trading platforms for a EUR 250 fee. They were then contacted by so-called agents or brokers operating from call centres who announced the opportunity of even higher profits, seducing victims into transferring more money to various accounts or releasing the debiting of additional amounts from their credit cards. Subsequently, the perpetrators simulated the alleged trading of financial products, misguiding the victims with fake positive outcomes displayed on the online trading platforms. In reality, no actual trading took place. Instead, the money was distributed to a large number of participants in a complex money laundering network installed across Europe. The companies at the end of this chain were under the control of the criminals, allowing them to withdraw the funds for themselves.

Thousands of investors suffered a complete loss of their money. In Germany, for example, the Bavarian Central Office for the Prosecution of Cybercrime at the Bamberg General Prosecutor's Office registered hundreds of victims and damages exceeding EUR 10 million. In Austria, the Central Prosecutor's Office for Combatting Economic Crime and Corruption reported around 850 victims, with presumed damages of at least EUR 2.2 million. The total damage caused by the OCGs exceeds these figures, given that the perpetrators targeted people in numerous countries in Europe and beyond. Furthermore, investigators assume a high number of unreported cases, since many investors may have mistakenly considered their losses a result of the high risks associated with the trading of certain financial products.

Eurojust assisted the investigations by funding a joint investigation team (JIT), as well as organising both a coordination meeting at its premises in The Hague and a videoconference. During the action day, a coordination centre at Eurojust ensured judicial support and effective exchanges of information and evidence. The action was successfully carried out by the Austrian Central Prosecutor's Office for Combatting Economic Crime and Corruption, the Bulgarian Specialised Prosecutor's Office, the Bavarian Central Office for the Prosecution of Cybercrime at the General Prosecutor's Office in Bamberg, Germany, the Special Prosecution Office for High-Tech Crime of the Republic of Serbia and the Department for International Cooperation and Mutual Legal Assistance of the Republic Public Prosecution Office of the Republic of Serbia. Europol provided information exchange.