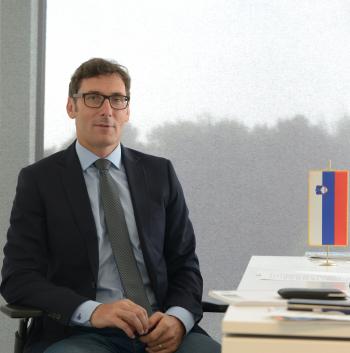 Mr Boštjan Škrlec, National Member for Slovenia, has today been elected Eurojust Vice-President. Mr Škrlec has been representing the Slovenian judiciary at Eurojust since 2017 and will serve a mandate of four years. Last month, Mr Ladislav Hamran was re-elected President of Eurojust while in November last year Mr Klaus Meyer-Cabri had already been reconfirmed in his role as the other Eurojust Vice-President.

Mr Škrlec said: ‘Firstly, I wish to thank my colleagues for putting their trust in me. I take this honour humbly and with a sense of huge responsibility. Eurojust has proved its value in providing enhanced forms of judicial cooperation in the most complex investigations of trans-border crime. With crime becoming ever more complex, including through the use of new technologies, the role of Eurojust will continue to grow. By adapting rapidly to the new reality of electronic communication, brought about by COVID-19, we have learned the true value of real-life contacts. Now it is our task to find the right balance between the best of both these worlds: the digital one and the world of face-to-face human interaction.’

Mr Škrlec has over twenty years of experience in the judiciary and began his career as a State Prosecutor in 1999. Before joining Eurojust, he was Director General at the Supreme State Prosecutor's Office of the Republic of Slovenia. During his professional career, he has been involved in international relations and cooperation and has participated in numerous cross border projects in the field of criminal justice.

The National Member for Slovenia has been a member of the Committee of Experts on the Evaluation of Anti-Money Laundering Measures (MONEYVAL) at the Council of Europe since 2005. He currently participates in the work of its European Committee for the Prevention of Torture and Inhuman or Degrading Treatment or Punishment (CPT). From 2008 to 2012, Mr Škrlec served as the State Secretary at the Ministry of Justice of the Republic of Slovenia.