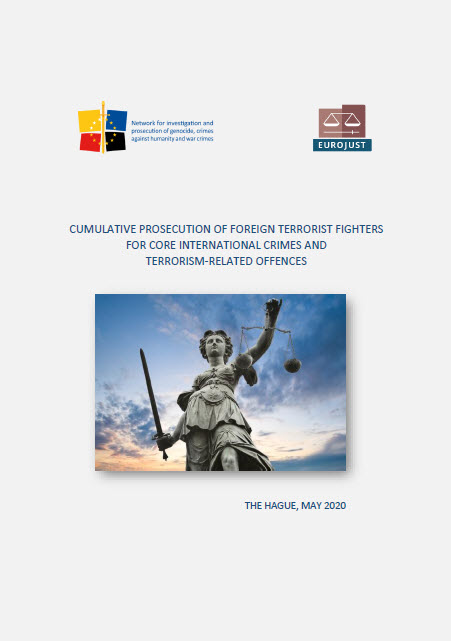 Prosecutors in the EU are increasingly cumulating charges against returning foreign terrorist fighters (FTFs), members of ISIS and its affiliates, with genocide, crimes against humanity and war crimes, so-called core international crimes. In over 20 cases in five Member States, judgments have been delivered or investigations and trials are ongoing where FTFs are charged not only with membership of a terrorist organisation but also with core international crimes, increasing the possibility of higher sentences and of getting justice done for victims. This is the main conclusion of the report 'Cumulative prosecution of foreign terrorist fighters for core international crimes and terrorism-related offences', which will be presented on the occasion of the 5th EU Day against Impunity for genocide, crimes against humanity and war crimes on 23 May 2020.

This day is co-organised by the Croatian Presidency of the Council of the European Union, the European Commission, Eurojust and the Network for investigation and prosecution of genocide, crimes against humanity and war crimes (the Genocide Network). In view of the current COVID-19 crisis, all presentations have been put online via the Eurojust YouTube channel. The concept of cumulative charges was the focus of a major conference organised last year by the Genocide Network and Eurojust, the EU Agency for Criminal Justice Cooperation.

Eurojust President Mr Ladislav Hamran said: 'During this 5th EU Day against Impunity, we show the world that we care  not only about European citizens, but about humanity as a whole. It is our joint responsibility to bring justice to the countless victims and people affected by armed conflicts. Eurojust proudly supports prosecutors dealing with cases concerning core international crimes, and is honoured to host the Genocide Network Secretariat.'

Croatian Minister of Justice Mr Draen Bonjakovic stated: 'Although the world is currently facing the fight against the pandemic of coronavirus, we need to be reminded that even in this situation there are individuals and groups in certain parts of the world that continue to commit crimes of genocide, crimes against humanity and war crimes. That is why our fight against impunity for such crimes needs to be continued.'

European Commissioner for Justice Mr Didier Reynders pointed out: 'I would like to congratulate the national authorities for their efforts to follow up on these complex cases. Please remember that Union bodies are there to assist. This is a clear signal to everyone that the EU stands united and firm to stop impunity for serious international crimes. I would also like to express my thanks to the Genocide Network hosted by Eurojust that does a fantastic job in that regard.'

Nobel Peace Prize laureate and human rights activist for the persecuted Yazidi community Ms Nadia Murad said: 'Survivors and victims of ISIS deserve justice  not empty promises of hope. Living without receiving justice is another kind of torture. It is not enough for foreign ISIS fighters to be tried as terrorists. They must be tried for war crimes, crimes against humanity, and genocide. This is especially true for those fighters that enslaved Yazidi women and girls.'

Prosecutors in Germany, France, Hungary, Finland and the Netherlands have ongoing cases against FTFs or even judgments were delivered with cumulative charges. Many of these FTFs have links with Member States through nationality or residency, while others sought to enter EU territory as refugees or asylum seekers.

These cases demonstrate that ISIS, Jabhat al-Nusra and their affiliates are not only terrorist organisations but should also be considered as parties to a non-international armed conflict in Syria and Iraq. Its members are therefore culpable of committing war crimes, next to crimes against humanity and the crime of genocide. Suspects are often tried for their primary terrorism offences, but may also carry responsibilities for other crimes committed in third States. 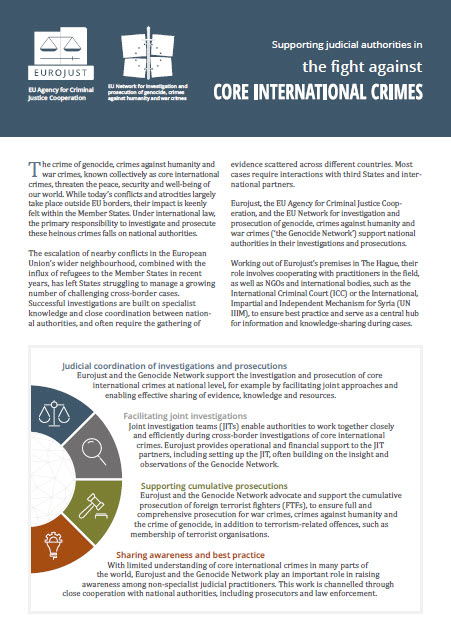 These other offences may include war crimes of pillage, slavery, enlisting of child soldiers, murder as a crime against humanity or even the crime of genocide, but often stay unpunished. Additional possibilities to issue convictions lie in so-called 'selfie' or 'posing' cases: the use of photographs and videos posted on social media depicting the inhumane treatment of dead persons.

Eurojust and the Genocide Network advocate and support cumulative prosecutions that encompass the full criminal scope of individual perpetrators, enabling longer sentences. This is particularly important for victims of ISIS who have suffered great harm and seek justice. Additionally, prosecution of core international crimes is not subject to time limitations. This enables prosecutors to work on these cases for decades ahead.

For more information on concrete cases and the Network, please consult this factsheet on supporting judicial authorities in the fight against core international crimes.