With the active support of Eurojust, the Italian Public Prosecution Office (PPO) of Foggia, in close cooperation with the German national authorities, dismantled an organised crime group trading adulterated olive oil in Germany and Italy, leading to the arrest of 24 persons. Two suspects of Italian origin were arrested in Germany via European Arrest Warrants (EAWs). Eurojust, the EU's Judicial Cooperation Unit, assisted the national authorities by facilitating the transfer of proceedings, the execution of EAWs and mutual legal assistance requests, and by successfully coordinating the action day that led to the pre-trial arrest of the main suspects. The total damage amounted to at least €8 million.

The investigations in Foggia were initiated in 2015, following an alert by the Italian Ministry of Health on the sale of counterfeit olive oil and a preceding request by the German Federal Office of Consumer Protection and Food Safety (Bundesamt für Verbraucherschutz und Lebensmittelsicherheit, (BVL)). The proceedings were transferred from the German to the Italian authorities. Investigations were opened and followed by the Italian Carabinieri for Health Safety (NAS), a specialized unit of the Italian Law Enforcement, in close contact with German police forces.

The members of the organised crime group  were allegedly involved in the production and trade of counterfeit olive oil and are suspected of illegal trading, participation in a criminal organisation, adulteration of food products, and other offences committed in relation to the above crimes. The olive oil, which originates from Apulia in Southern Italy, was mixed with various substances, such as chlorophyll, beta-carotene and soya oil, to modify its colour. The product was then distributed to the German market for a long period of time as extra virgin olive oil, mainly restaurants and shops in Stuttgart, Frankfurt and Berlin, as well as restaurants and supermarkets throughout Italy.

The leader of the criminal organisation is considered to be the most important counterfeiter of olive oil in Italy. However, the German buyers are not regarded as members of the organised crime group, as they were not part of its structure and are only suspected of handling fraudulently produced goods. 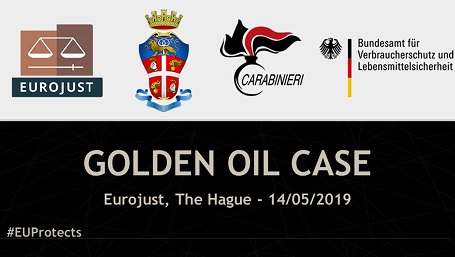 Eurojust improved the cooperation between the national judicial authorities by helping them to efficiently exchange information and gather useful evidence to build a strong case against the members of the criminal organisation. Eurojust held three coordination meetings at its premises in The Hague, inter alia, to discuss prosecutorial strategies and identify the competent executing authority in each Member State for the requested measures. Europol was involved at an early stage of the investigations, participating in the first Eurojust coordination meeting in 2016.

Only through Eurojust's coordination, it was possible to identify the activities and capabilities of this organised crime group, which operated for a long time undisturbed, taking advantage of a penal legislation not particularly severe towards the single acts of trade in counterfeit oil. For this reason, it was less easy to understand the transnational dimension of the fraud and the insidiousness of the organised group in the food products market.