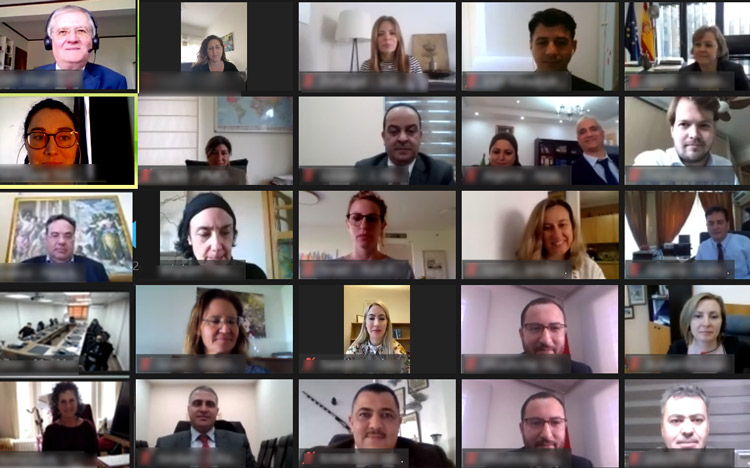 Judicial experts from Euro-Mediterranean countries (CrimEx) and Eurojust have started the design of new tools for the protection of personal data and cross-border electronic evidence gathering. Furthermore, the development of new mechanisms on joint and parallel investigations and procedural rights of both suspects and victims has commenced. CrimEx will also update pioneering analytical tools and practical manuals, such as the EuroMed Fiches and the Digital Evidence Manual. These are the main outcomes of the 10th Regular CrimEx meeting under the EuroMed Justice (EMJ) Programme, hosted this week by Eurojust.

CrimEx is the high-level Experts Group in Criminal Matters of the Southern Partner Countries (SPCs) – Algeria, Egypt, Israel, Jordan, Lebanon, Libya, Morocco, Palestine1 and Tunisia – that cooperate with the European Union and its Justice and Home Affairs Agencies in EMJ. The CrimEx meeting follows the launching conference, earlier this month, of the most recent phase of EMJ since being hosted by Eurojust as of 2020. CrimEx was established in 2017 and is composed of representatives of key judicial authorities such as prosecutor’s offices, ministries of Justice, High Courts and Judicial Councils.

CrimEx, designed as the permanent Euro-Mediterranean experts working group, functions as a think tank and cross-regional forum to build trust and mutual confidence and to facilitate the exchange of best practice and lessons learnt. It also enables thorough analyses of the situation in each of the SPCs and the whole region to be conducted. It aims to set up specific recommendations, guidelines, manuals, studies and research.

The Experts Group exercises cross-regional ownership in the implementation of Euro-Mediterranean judicial cooperation and drafts and upgrades EMJ cooperation tools. CrimEx interacts with other judicial networks, develops training activities and assists in the monitoring of the EMJ programme. During this week’s meeting, CrimEx also explored the creation of a network of national contact points, called EMJNet. In the long term, this network aims to become the CrimEx national facilitator of all SPCs for cross-border cooperation, to connect judicial contact points and networks and assist in solving concrete cases.

EuroMed Justice is a programme financed by the European Commission and implemented through Eurojust.