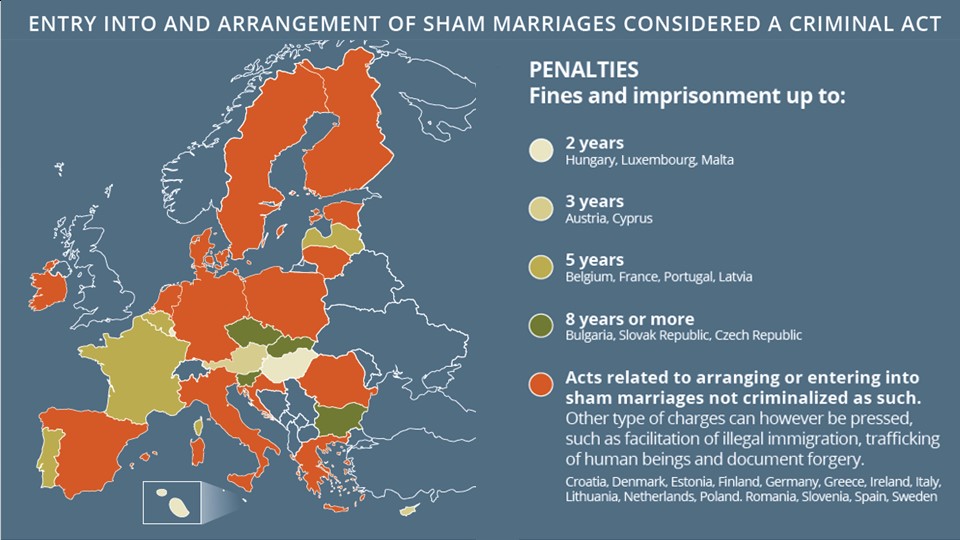 A broad common approach, involving administrations such as civil registries and consulates, is instrumental to tackling the fraud and abuse perpetrated by Organised Criminal Groups (OCGs) via sham marriages. In addition, further enhancement of judicial cooperation and the coordination of investigations at EU level will give extra impetus to the fight to thwart those arranging marriages of this kind. These are the main recommendations made by Eurojust, the European Union Agency for Criminal Justice Cooperation, in a report which was adopted today.

The report gives an overview of casework on how human trafficking and migrant smuggling networks lure mainly women into exploitation and even physical abuse via marriages of convenience. It also states that the lack of harmonised national legislation may be exploited by OCGs, who often try to circumvent asylum and migration laws and ‘shop around’ before concluding marriages in jurisdictions which apply the lowest penalties or where these acts are less perceived.

Eurojust Vice-President and National Member for Italy, Mr Filippo Spiezia, said: ‘Combatting migrant smuggling is one of the priorities for Eurojust, as it is a heinous crime which exploits vulnerable people. Due to our unique role as coordinating Agency, we have been able to provide this extensive analysis and make recommendations to react and tackle the criminal phenomenon of sham marriages. By doing so, we can help action to be taken more proactively, in line with the role we would like to play in fighting cross-border crime.’

The number of complex cases involving sham marriages, for which the assistance of Eurojust is requested by national authorities, has more than doubled over the last ten years. Last year alone, Eurojust was involved in 185 cases of migrant smuggling, four of them specifically concerning sham marriages. In seven cases a special Joint Investigation Team (JIT) was set up, with financial support provided by the Agency.

JITs have proven to be an effective way of investigating sham marriage cases, allowing a smoother exchange of information and evidence-sharing among the authorities involved. Often other, related and serious forms of crime, which are not evident when looking at the case from the national perspective only, are revealed. More frequent use of the JIT instrument is another recommendation made in the report. 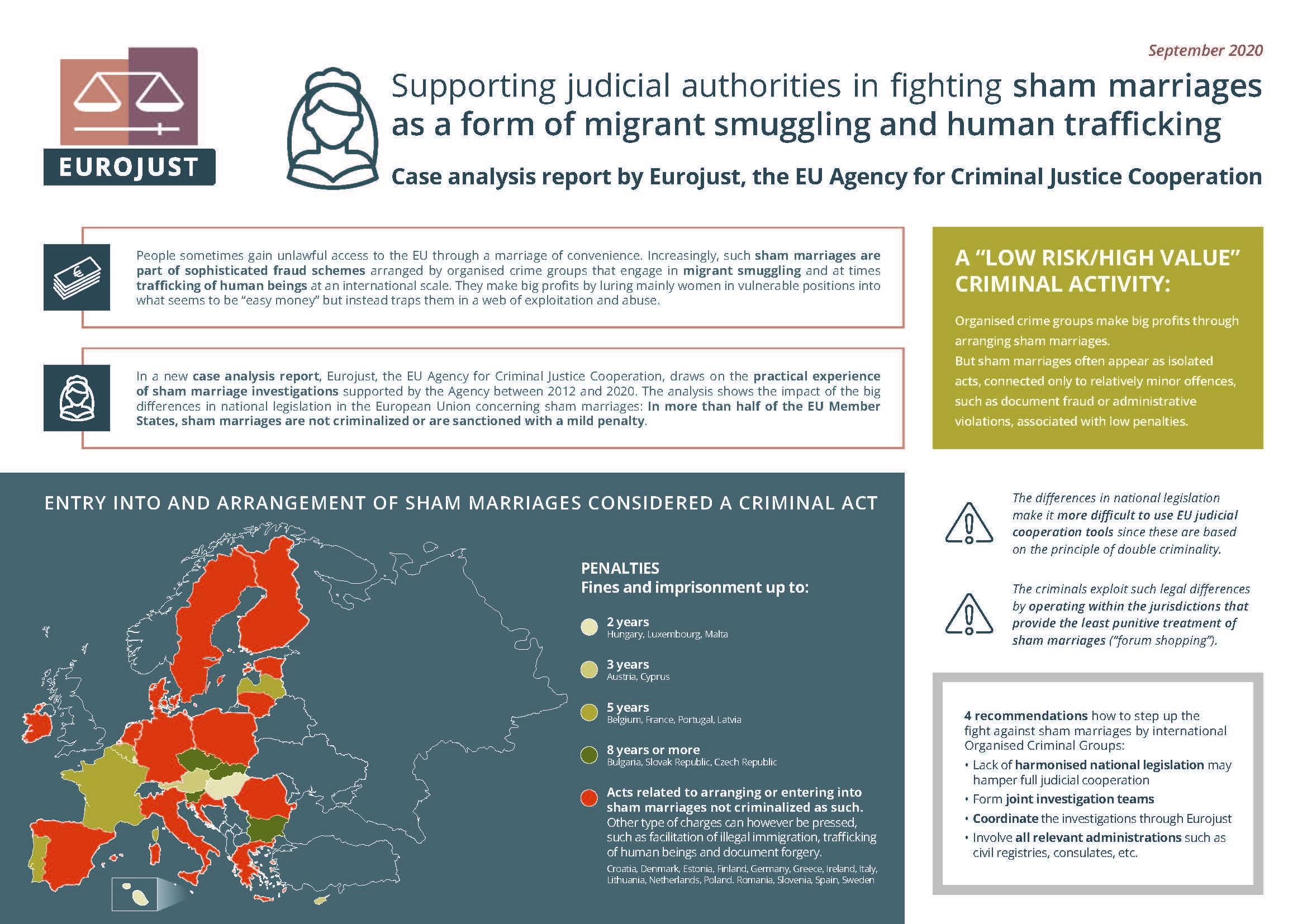 Eurojust can play a central role in identifying links between different criminal activities of OCGs in several jurisdictions, within or outside the EU. Sham marriages often appear as isolated acts, connected only to relatively minor offences, such as document fraud or administrative violations where the penalties are modest. However, in many cases they are part of a broader criminal fraud scheme, including money laundering, document counterfeiting and people smuggling or human trafficking, where high profits are made on the back of the victims.

In the efforts to combat sham marriages, Eurojust can facilitate investigations and assist with the coordination of joint prosecution strategies, to prevent the risk of a case being prosecuted in two countries, the so called ne bis in idem principle, which could lead to acquittal of the suspects. An occasionally partial transfer of proceedings can also lead to better protection of the victims.

These victims are lured into what seems to be “easy money”, but instead become trapped in a web of exploitation and abuse. Sham marriages are also a direct abuse of the fundamental right to freedom of movement within the EU while also creating, for instance, unwarranted access to the European labour market and social security benefits in the Member States. Since 2012, the EU has therefore firmly stressed the importance of effective cooperation in tackling marriages of convenience, the arranging of which has recently been identified by the European Commission as one of the three main forms of facilitating irregular migration into the EU. The Eurojust report goes deeper into the assistance provided between 2012 and 2020 to the present day.

The report will be discussed later this week at Eurojust during the first meeting of a special Focus Group of prosecutors and investigating judges specializing in or dealing with migrant smuggling cases. The Eurojust meeting is designed to help strengthen the interactivity of prosecutors and to provide a forum for discussion of topics of mutual interest, such as sham marriages.