A major operation involving judicial and law enforcement authorities from Belgium, France, the Netherlands and the United Kingdom, supported by Europol and Eurojust, led to the dismantling of a large network of criminals smuggling migrants in life threatening conditions across the English Channel. 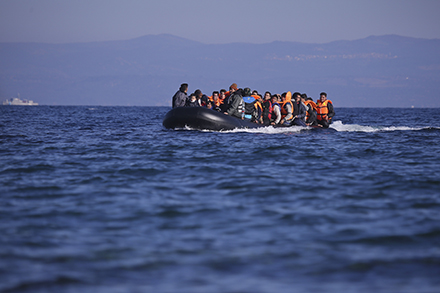 12 suspects were arrested in the combined operation, including 2 in the Netherlands, 7 in France and 3 in the UK. The overall seizures during the two action days included 12 vehicles, 10 rubber boats and engines, 152 life jackets, a caravan, a boat trailer, jewellery, about €48 000 in cash, documents and mobile devices.

This investigation targeted a developing trend of migrant smuggling involving small boats across the English Channel. This criminal activity has escalated exponentially in the recent months with over 4600 irregular migrants detected since 2018 on the UK shores and increased interceptions in France. The successful action demonstrates the results that can be achieved through intensive cooperation and information exchange, which is essential to tackle this growing form of human trafficking.

The organised crime group comprised mainly Iranian nationals living in France, the Netherlands and the UK. The network is believed to have made huge profits from smuggling migrants in small boats from the north coasts of France to the UK. The suspects organised their criminal activity through ties in different countries. Members of the criminal group purchased inflatable boats and engines from Germany and the Netherlands and transported them to the departure points. There, they were providing training skilled migrants on how to operate the boats while charging an average of €3000 per person for the crossings. Information gathered during the investigations provided confirmation that the criminal organisation had facilitated the illegal sea crossing of a large number of migrants.

Transporting migrants in overloaded boats, often in very difficult weather conditions on one of the busiest commercial shipping lanes in the world, endangered the lives of both the migrants and also the law enforcement officers conducting sea rescue operations.

Close cooperation across the North Sea

The action is a result of a close cooperation between Belgium, France, the Netherlands and the United Kingdom since June 2020, supported by Eurojust and Europol. The initial information sharing lead to the creation of a joint investigation team in September.

With the information sharing that took place during the first coordination meeting at Eurojust, the UK was able to react quickly and identify a linked domestic investigation. Following a period of intense negotiations facilitated by the respective National Desks at Eurojust, it was agreed that the UK would join the Joint Investigation Team, which facilitated this action day.

Frank Demeester, public prosecutor’s office West-Flanders, human smuggling department, said: “It is clear that organised crime groups, specifically in cases of illegal migration and human smuggling, are working on an international level. They are not bothered concerned by the boundaries between the different countries. That is why the four countries around the North Sea have to must work closely together to fight this type of criminality.

By combining forces from the judicial authorities of The Netherlands, Belgium, France and the United Kingdom, we were able to put together all the pieces of the jig-saw puzzle very quickly and confront different members of the same OCG. In times rendered more difficult by COVID19, it was thanks to the Eurojust and Europol network and video conferencing that we could finalise all the necessary arrangements.”

Europol supported the operation by facilitating the information exchange, organising operational meetings and providing analytical support with two intelligence analysts dedicated to this high priority case. On the action day, Europol set- up a Virtual Command Post to facilitate d the operational coordination and the real-time exchange of information between law enforcement officers on the ground in real time.