France’s Minister for Justice, Mr Éric Dupond-Moretti, visited Eurojust yesterday to discuss the role of Eurojust in the fight against cross-border crime. He also discussed the upcoming French Presidency of the Council of the European Union with Eurojust President Mr Ladislav Hamran. France will hold the Presidency of the Council during the first half of 2022, taking over from Slovenia. Mr Dupond-Moretti also spoke about the 20-year jubilee of Eurojust, which will be celebrated next year. 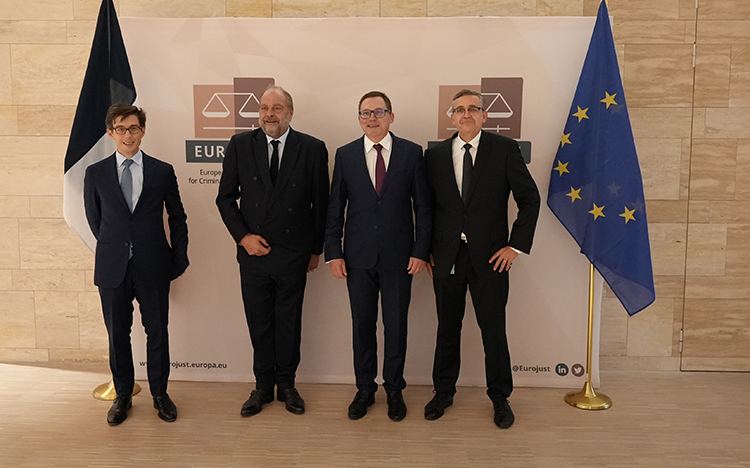 Eurojust President Mr Ladislav Hamran said: ‘Eurojust and France are longstanding partners. With the visit of Minister Dupond-Moretti, we pay tribute to the excellent collaboration that exists, as demonstrated, for instance, by the EncroChat and SkyECC cases. We look forward very much to the cooperation with the French Presidency in the first half of 2022, especially since we will celebrate the 20th anniversary of Eurojust next year.’

France’s Minister for Justice Mr Dupond-Moretti stated: ‘France has been supporting Eurojust since the beginning, when my predecessor 20 years ago was among the first to believe in the idea and to support the creation of Eurojust. I can assure you that we will continue upholding this agency in its important work.’

Mr Dupond-Moretti was accompanied by the President of the National Conference of Prosecutors General, Mr Frédéric Fèvre, and by the Director of the Directorate of Criminal Affairs and Pardons (DACG) of the French Ministry of Justice, Mr Olivier Christen. During the visit, Mr Baudoin Thouvenot, National Member for France, gave an explanation of the crucial role Eurojust plays in judicial cooperation.

After a general overview, he gave the floor to the other members of the desk who briefly presented three important topics. Ms Julie André gave a presentation on the emblematic EncroChat case, followed by Ms Raphaëlle Bail, who turned the focus to cybercrime. Finally, Deputy National Member for France Mr Eric Figliolia presented on the growing Eurojust involvement against environmental crime.