The newly appointed Liaison Prosecutor for Serbia at Eurojust, Ms Gordana Janicijevic, has taken up her duties. Ms Janicijevic was officially introduced today to the Eurojust College during a visit of Serbian Republic Public Prosecutor Ms Zagorka Dolovac. Serbia is the 7th country to have a Liaison Prosecutor at Eurojust. Liaison Prosecutors can open cases for support from EU Member States and participate in coordination meetings and coordination centres to step up the fight against cross-border crime. Since 2015, Serbia has already cooperated with Eurojust in nearly 150 cases involving serious organised crime.
Eurojust President Mr Ladislav Hamran said: 'I warmly welcome Ms Janicijevic to The Hague and look forward to an excellent cooperation. It is of great importance that an increasing number of countries want to work together with Eurojust in the fight against cross-border organised crime and terrorism. I am convinced that the valuable experience of Ms Janicijevic and the full backing of the Serbian authorities will play a crucial role in our efforts to further increase our operational and strategic cooperation with the Western Balkans region.' 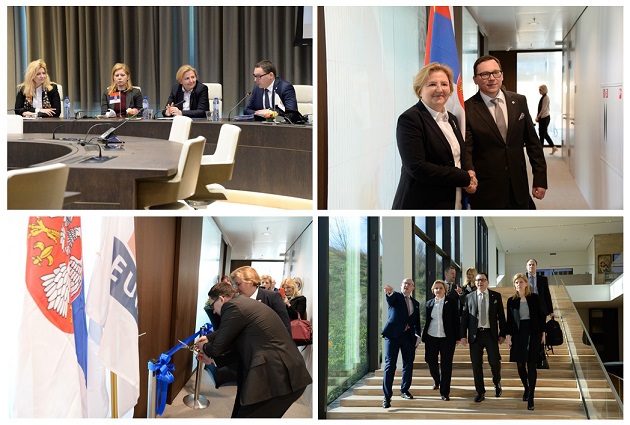 Republic Public Prosecutor of Serbia Ms Zagorka Dolovac pointed out: 'This is an important moment and day in the joint history of the Republic Public Prosecution Office of Serbia and Eurojust, and also a significant development in the relationship between the Republic of Serbia and the European Union. Our joint professional efforts and commitment were recognized and now are allowed to prosper even more. I am certain that our representation here in The Hague will be able to continue with proven quality and reliability in cooperation with European and other colleagues to fulfil the most important task of protecting our societies from dangers and consequences which contemporary crime represents.'
Liaison Prosecutor for Serbia Ms Gordana Janicijevic stated: 'I am very honoured to be the first Liaison Prosecutor for Serbia at Eurojust. Given the previous caseload, I believe that having a cooperation agreement and presence at Eurojust will enhance the already excellent cooperation between Serbia and Eurojust in fighting serious transnational crime. I look forward to a close cooperation with all the countries represented at Eurojust, and I expect an increased exchange of information and the most efficient coordination.'
Ms Janicijevic was Deputy Republic Public Prosecutor of Serbia before starting in her new role at Eurojust. The opening of a Serbian liaison office at Eurojust is supported by the Instrument of Pre-Accession Assistance IPA/2017 project 'Countering Serious Crime in the Western Balkans', of the European Commission (DG NEAR) and the German Federal Government. 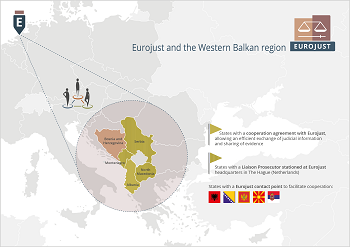 Eurojust and Serbia have signed a cooperation agreement in November of last year. Between 2008 and 2018, Eurojust has already concluded similar agreements with three other countries in the Western Balkans: North Macedonia, Montenegro and Albania. Both North Macedonia and Montenegro already have Liaison Prosecutors in The Hague.
Serbia has worked with Eurojust on 150 cases involving serious crime since 2015 and attended 22 coordination meetings. It has participated in seven Joint Investigation Teams (JITs), most of which involved drug trafficking cases, and took part in two joint action days supported through Eurojust's coordination centre. The most frequently involved crime types are drug trafficking, swindling and large-scale fraud.
For more information on Eurojust's cooperation with Serbia and countries of the Western Balkans, click here.
Related tags: Cooperation agreement, Liaison Prosecutor, Serbia