Mr Ladislav Hamran has been re-elected as President of Eurojust, the European Agency for Criminal Justice Cooperation. National Member for the Slovak Republic at Eurojust, Mr Hamran (47) was elected during today’s virtual meeting of Eurojust’s College for a new term of four years. 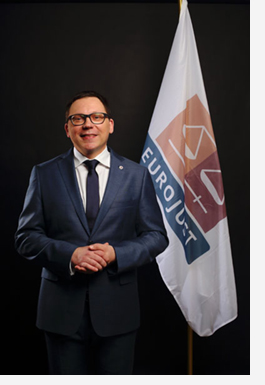 Mr Hamran said: ‘Being re-elected by my peers is a great privilege and the highest recognition of my work during my first term as President. I firmly believe in our mission and ability to make a difference, and consider it an absolute honour to lead the Agency for another four years.

Today, I was given a clear mandate to steer the organisation towards complete digitalisation of judicial cooperation in Europe and focus on further expanding our global network. I look forward to building on the impressive results we have achieved so far, together with the Member States, European institutions, and many other partners both inside and outside the EU.’

The digitalisation of justice in the EU was one of the focal points of Mr Hamran’s first term as President and will continue to be a key focus at Eurojust. This year, the European Commission will table proposals for the Digital Justice project and Eurojust will play an important role in rolling out a system of secure digital channels for the exchange of information and evidence between prosecutors across the EU.

Another priority for Mr Hamran will be to further extend Eurojust’s global scope. Stressing the need for further international cooperation for a long time, with criminal networks increasingly operating on a global scale, Mr Hamran has also stepped up collaboration with partners outside the EU since starting his term as President.

Other priorities include continuing the fight against terrorism, in the wake of last year’s introduction of a Judicial Counter-Terrorism Register at Eurojust, and strengthening Eurojust’s partnerships with other EU Agencies in the field of Justice and Home Affairs, such as Europol and Frontex. In addition, Mr Hamran wants to build up a good working relationship with the European Public Prosecutor’s Office (EPPO) in Luxembourg, which started this year, and continue the good cooperation with the European Anti-Fraud Office (OLAF).

Mr Ladislav Hamran is a public prosecutor with over twenty years of experience, particularly in cases involving economic crime, corruption and asset recovery. After completing his legal studies at the Faculty of Law of Comenius University in Bratislava, he started working as a prosecutor in 1997.

In 2003, he joined the General Prosecution Office in Bratislava, where he mainly investigated and prosecuted cases involving economic crime and corruption, until his secondment to Eurojust in September 2007. In 2013, he was elected Vice-President of Eurojust and was re-elected in this role in 2016 before becoming President in November 2017. Mr Hamran is married with two children. He speaks Slovak, English, Hungarian and Russian.

In view of the current COVID-19 crisis, the election took place during a virtual meeting of the College of Eurojust, comprising all National Members and a representative of the European Commission. The President of Eurojust is elected every four years by the National Members who are based at the Agency in The Hague, and the European Commission. National Member for Germany Mr Klaus Meyer-Cabri was re-elected as Vice-President in November last year. Eurojust’s second Vice-President will be elected next month.