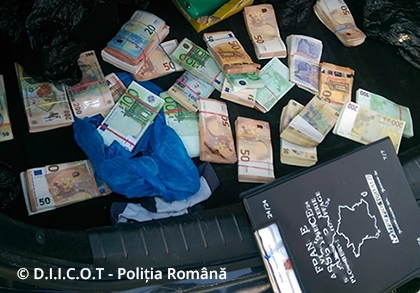 On a joint action day, supported by Eurojust, the French and Romanian authorities arrested 11 members of an organised crime group (OCG) involved in the smuggling of 308 migrants to the UK. 18 house searches were carried out and weapons as well as around half a million euro in cash were seized. Eurojust actively coordinated the parallel national investigations to bring down the criminal group in its entirety, prevent conflicts of jurisdiction and decide on the best place to prosecute. This successful case clearly demonstrates the added value of judicial cooperation facilitated by Eurojust, which helps to bridge the gap between diverging national legislations.

The French investigation into the group was initiated in August 2018, followed by the Romanian and UK authorities in March 2019, and the Dutch ones in May 2019. On 6 June 2019, based on the quick and effective exchange of information between all countries involved at a coordination meeting at Eurojust and an operational meeting at Europol, the main targets as well as the hierarchical structure and modus operandi of the OCG were quickly identified. During the action day (12 June), Eurojust facilitated the swift and simultaneous execution of several French European Investigation Orders and European Arrest Warrants, issued towards the Romanian and UK authorities.

The migrant smuggling OCG was composed mainly of Romanian truck drivers, middlemen and leaders. The OCG members smuggled migrants mostly of Palestinian, Iraqi, Iranian and Afghan origin, using trucks that belonged to Romanian companies. The migrants were transferred to transit sites in the North of France, as well in Belgium and the Netherlands, with the UK as destination country. The truck drivers promised a 'guaranteed transit' to the migrants, charging them with a fee ranging between €11 000 €14 500. The total illegal proceeds amount to €3,4 million approximately.

So far, 59 active OCG members were identified. The criminals are accused of illegal migrant smuggling, participation in a criminal organisation, as well as money laundering.