On 12 November 2018, Ms Lenche Ristoska took up her duties as the first Liaison Prosecutor for the former Yugoslav Republic of Macedonia at Eurojust. Her appointment is an important contribution to the growing relationship between the European Union and the Western Balkan region in the area of criminal law.

Since 2008, Eurojust has established an increasingly strong framework for structural judicial cooperation in the fight against serious cross-border crime between EU Member States and the Western Balkan States. Cooperation agreements, which unlock the possibility of safe and efficient exchange of judicial information and sharing of evidence, have been concluded with Albania, Montenegro and the former Yugoslav Republic of Macedonia. The agreements also allow for the partner States to take part in, and benefit from, all the practical cooperation tools offered through Eurojust to prosecute serious, transnational crime cases.

Since the conclusion of the cooperation agreement with the former Yugoslav Republic of Macedonia in 2008, prosecutors from all parties to the agreement have worked together in a growing number of cases, including in investigations of swindling and fraud, drug trafficking and migrant smuggling. 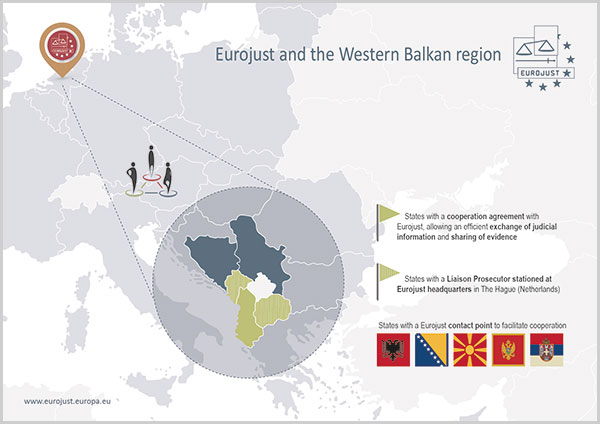 Upon her arrival, Ms Ristoska said: 'It is a great honour and privilege to be the first Liaison Prosecutor for my country at Eurojust. As soon as I joined the Eurojust family, I witnessed the inspiring working atmosphere and deep commitment of all employees. I strongly believe that my country's presence at Eurojust will contribute to enhancing international cooperation in the fight against transnational organised crime. I am also confident that this will be beneficial not only for my country but also for all countries with which international cooperation exists or will be established.'

Quick facts
Ms Ristoska graduated with honours from the Law Faculty of the St Cyril and Methodius University of Skopje and obtained a degree in law. In 2008, she passed her Bar Examination. Currently, she is working on her master thesis in the area of seizure of illegally gained assets.

In November 2015, she was appointed as prosecutor to the Special Public Prosecutor's Office, where she was in charge of matters of international cooperation and MLA requests. She also conducted national criminal investigations into complex cases of illegal interception of communications, abuse of official powers, corruption, illegal political party financing and money laundering.

Background
The negotiation of cooperation agreements between Eurojust and Western Balkan States and the appointment of Liaison Prosecutors to Eurojust are facilitated through the Instrument for Pre-Accession Assistance 2014-2020 (IPA II Project) 'Countering Serious Crime in the Western Balkans', which fosters structural judicial cooperation between EU Member States and the Western Balkan States. The project is jointly funded by the European Union, Germany and Italy.