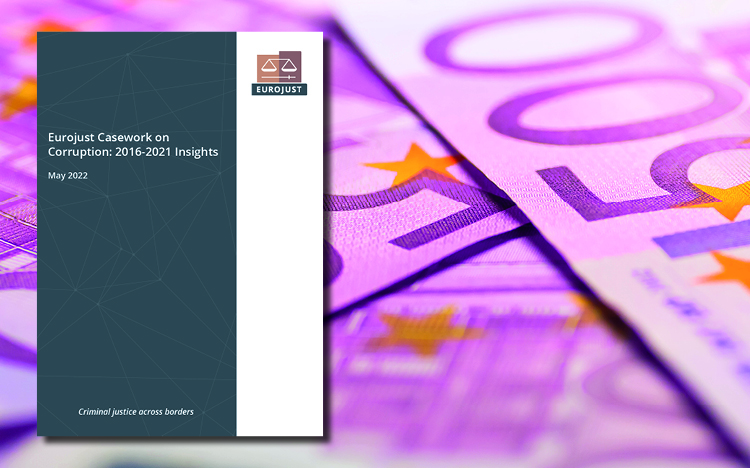 More than 500 corruption cases have been registered at Eurojust during the past six years. Compared with the 78 cases registered at the Agency in 2016, the number of cases rose to 112 in 2021, despite the COVID-19 pandemic. This increase reflects the EU's priority to crack down on corruption and Eurojust's growing importance in helping Member States tackle this specific type of cross-border crime.

Eurojust Casework on Corruption: 2016–2021 Insights, presents key findings based on the Agency's casework and offers expert advice to practitioners to assist them in similar cases in the future.

The report, published today, is the Agency's first dedicated publication in the field. It aims to support national authorities dealing with cross-border corruption cases by identifying possible problems and solutions.

Eurojust is uniquely equipped to address the specific challenges of corruption cases through its judicial cooperation tools. Coordination through Eurojust has led to tangible results, including seizures, confiscations, arrests and convictions in complex cross-border corruption investigations and prosecutions worldwide.

Cooperation with third-country Liaison Prosecutors at Eurojust has proven essential in such cases, including the high-profile FIFA World Cup media rights investigation, during which data and operational information were swiftly exchanged.

Since corruption is by nature committed in secrecy, it is difficult for authorities to detect, let alone prosecute, especially when cases involve high-level officials and politically exposed persons. Eurojust is experienced in handling such sensitive cases.

Differences in domestic procedural law as well as in definitions of corruption can also create difficulties in cross-border cases. In a number of corruption cases, investigations are complicated by company secrets and suspects invoking domestic provisions to protect themselves against self-incrimination. In such cases, cooperation is essential, as authorities can share evidence through a European Investigation Order, Letter of Request or spontaneous exchange of information.

Supporting EU Member States' judicial authorities in accessing and exchanging banking and financial information is a critical component of effective corruption investigations. Speed is of utmost importance in these requests, and the report highlights several cases in which Eurojust has succeeded in accelerating their execution.

The report also underlines the increasing use of joint investigation teams in corruption cases as an efficient tool for judicial cooperation. Coordination meetings organised by Eurojust are also valuable for building trust, which is especially relevant for corruption cases due to their sensitive and confidential nature.

Eurojust has successfully cooperated with the European Anti-Fraud Office (OLAF) and Europol on a range of corruption cases cited in the report. The Agency will continue to pursue working with key partners in the corruption field and will cooperate with the European Public Prosecutor's Office (EPPO) on future cases.