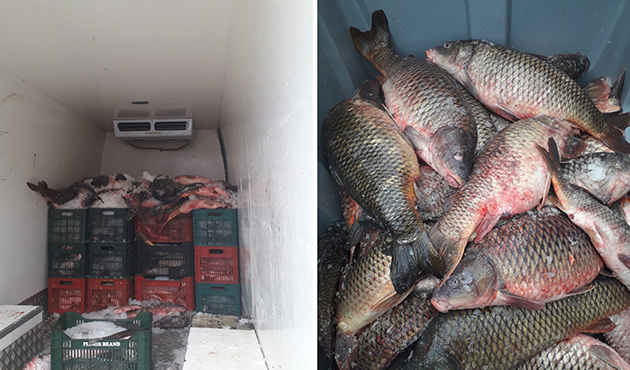 In a major operation, coordinated by Eurojust, authorities from Romania, Spain, France, Italy, Hungary and Portugal took action against an organised crime group involved in illegal fishing in contaminated waters, tax evasion and money laundering. The contaminated fish was stored in, and transported to, several EU countries in improper and unsanitary conditions, and then sold to Romanian companies. As a result of the joint action day, enabled through a coordination centre set up at Eurojust, the EU's Judicial Cooperation Unit, almost 250 searches were performed, 13 people in total were arrested as well as 11 boats and 30 tons of contaminated fish were seized and taken from the market. Eurojust assisted in real time with the issuing of three European Investigations Orders from Romania towards Hungary during the action day, thus allowing for real-time exchange of information.

The members of the organised crime group (OCG), who were former fishermen, developed a sophisticated mechanism for poaching and purchasing fish from contaminated territorial waters in Italy, Spain and France, where fishing is prohibited as the fish in those areas is unfit for consumption. The contaminated fish was sold to Romanian companies, which were especially set up as 'ghost' fish marketing companies to serve the OCG's criminal activities.

Through those companies, the OCG members obtained fishing permits and VAT codes for the trades, but did not acquire the mandatory sanitary authorisations for intra-Community trade of products of animal origin. They used fake invoices and other falsified documents to resell the fish in Spain, France, Italy, Hungary, Portugal and Romania, reaping substantial illicit profits, including by evading taxes and laundering money. The OCG did not have a pyramidal structure, but acted at several levels on which distinct cells were formed, based on each specific activity (fish poaching, freight transport, trade etc.).

Eurojust actively supported the cooperation between national judicial and law enforcement authorities from Romania, Spain, Hungary, France, Italy and Portugal. As a result, the criminal activity of the OCG was documented, and all gathered information was used to block 30 tons of additional contaminated fish from entering the Romanian market. The Romanian Sanitary, Veterinary and Food Safety Authority destroyed the entire amount of seized fish.

In 2018, the Prosecution Office of the Court of Appeal of Constan?a, Romania, initiated a criminal investigation into the OCG. The Investigative Judge No 4 and the Public Prosecutor's Office (PPO) of Lleida, Spain, launched a parallel investigation into the same OCG, followed by the PPO of Venice, Italy, and the PPO of Tarascon, France. All Member States combined their efforts with spontaneous exchanges of information, also facilitated by European Investigation Orders (EIOs).

Eurojust helped the national authorities throughout their investigations, including with drafting, issuing, transmitting and executing the EIOs during the action day. A coordination meeting was also held at Eurojust, with the participation of Europol, to decide on the investigative and prosecutorial strategies and solve judicial and operational issues. Europol assisted the investigations with cross-matching of information and evidence, demonstrating links to France and Italy.