Criminal network dismantled in Lithuania; the UK and Ireland

Judicial authorities and police in Lithuania, United Kingdom and Ireland, with support from Eurojust and Europol, have dismantled a criminal network responsible for drug trafficking, money laundering and trafficking in human beings. At least 65 people were exploited as street dealers.

Yesterday in Lithuania, Ireland and the UK, 18 suspects were arrested, including the leader of the organised crime group (OCG), while 65 searches took place and various assets were seized, with an estimated overall value of €700 000.

The investigation revealed street dealers operating in the UK and Ireland, who were nearly all Lithuanians. At least 65 people were identified, mostly from vulnerable social backgrounds or drug addicts themselves. Many of these people had been trafficked by the leaders of the OCG with the specific intent to commit crime, i.e. illegally sell drugs on the streets.

Proceeds from the criminal activity were laundered by purchasing various real estate properties and other related financial transactions. A financial investigation is currently ongoing.

Today's action day, enabled through the coordination centre set up by Eurojust and benefitting from operational support of Europol, was the result of successful cooperation between the judicial and law enforcement authorities in the three countries involved.

The case was referred to Eurojust by the Lithuanian national authorities at the end of 2017 given the cross-border dimension of the criminal activity.

In 2018, a joint investigation team (JIT) was set up between the Lithuanian authorities and their counterparts in Northern Ireland (UK), with financial and analytical support from Eurojust. Authorities in Ireland also joined the JIT during the investigation.

Six coordination meetings were held in a secure environment facilitated by Eurojust, ensuring close cooperation with the national authorities in all countries involved and planning of the joint actions, including setting up a common strategy taking into account the different jurisdictions.

'Today's result wouldn't have been possible without close cooperation between the Lithuanian, Irish and UK authorities, as well Eurojust's support in facilitating the judicial cooperation between all the parties involved. This shows that by working closely together we can ensure that drugs are kept off the streets and people are kept safe', said Margarita Sniutyte-Daugeliene, National Member for Lithuania at Eurojust.

Eurojust also helped out by issuing the Mutual Legal Assistance requests, facilitating the real-time exchange of information between the judicial authorities involved, and providing support in order to plan the operational activity conducted today.

Europol provided a secure platform for the exchange of tactical information in real time and ensured remote crosschecks all throughout the joint action day. 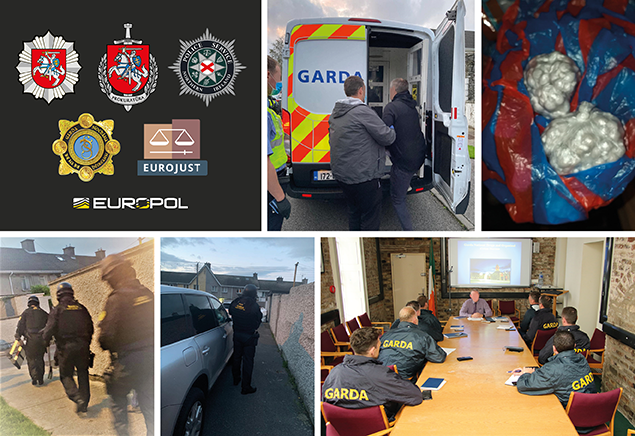