An unprecedented international operation, involving judicial and law enforcement authorities from 11 countries, has resulted in the arrest of 44 individuals. The arrested individuals were suspected of belonging to a high-risk criminal network considered one of the most dangerous in the European Union. 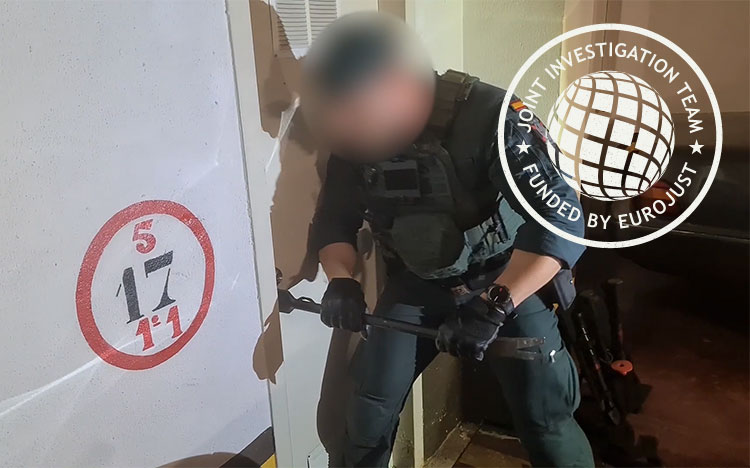 The investigations in eight countries uncovered that several criminal organisations were working together to carry out large-scale poly-criminal activities in and outside the European Union. These include drug trafficking, money laundering and illegal enrichment among others.

On 22 November, a total of 94 searches were executed across Europe, targeting both the leaders of these criminal organisations and their associates. The criminal network operated in Lithuania, Latvia, the Czech Republic, Poland, France, Germany and the Slovak Republic.

This international sweep follows complex investigations led by the Lithuanian Prosecutor General’s Office together and the Lithuanian Criminal Police Bureau, together with their partners in the Czech Republic, Latvia, France, Germany, Poland, Norway, Slovak Republic, Hungary, Spain and the United States, under the coordination of Eurojust and Europol.

Overview of the arrests:

Across borders and between continents

The scale of drugs trafficking alone attributed to this criminal network is massive, with activities reported across three continents.

Large quantities of various illicit drugs, such as cocaine, hashish and cannabis and methamphetamine were seized during the investigations. The criminal network is believed to be linked to major drug trafficking organisations outside the European Union.

Highly flexible, these criminals would quickly adapt to new drugs trafficking methods to try to evade law enforcement. Drug shipments have been found in vessels and trucks amongst others, often concealed in sophisticated hidden compartments.

The criminal network was structured like a business, with different criminal groups and brokers working together across borders to control the whole chain of drugs trafficking – from arranging huge shipments of drugs to the distribution throughout Europe and beyond.

International cooperation coordinated by Europol and Eurojust was central in bringing the perpetrators to justice who were all located in different geographical locations across the world.

From an early stage in the investigation, an Operational Taskforce was set-up at Europol, with Eurojust setting up and financing two joint investigation teams (JITs), which served as a joint hub for criminal intelligence. The participating countries  were able to combine and analyse all the information and evidence obtained on these criminal networks at a national level, together with the information held in databases of the participating law enforcement authorities.

Based on this pool of information and evidence, the different authorities agreed on a common strategy to prepare for the final phase of the investigations and bring down the whole network.

Eurojust not only assisted with setting up and financing the JITS, but organised 15 coordination meetings to prepare for the action day and set up a coordination centre to provide cross-border judicial assistance.

From the onset, Europol has provided continuous intelligence development and analysis which allowed for the identification of the targets and the mapping of their criminal activities. During the action day, a total of 4 of its officers were deployed on the ground in France, Czech Republic, Slovak Republic and Spain, ensuring the swift analysis of data as it was being collected and adjusting the strategy as required.

Eurojust Vice-President and National Member for Lithuania Ms Margarita Sniutyte-Daugeliene stated: This action day is the result of an exemplary and outstanding cooperation between judiciary and law enforcement, with the pro-active support of both Eurojust and Europol. This enabled a long term monitoring and well prepared operation, taking down at the same time several linked organised crime groups involved in large-scale drug trafficking.

Commenting on this operation, the Head of Europol’s Serious Organised Crime Centre, Jari Liukku, said: Criminals are good at cooperating across borders – operations like this one today shows them law enforcement and judicial authorities can do just as well. The success of this operation shows how powerful and far-reaching our actions can be when we join forces to turn the tables on these high-risk criminals, regardless of where they are located.

The following authorities took part in these investigations: