Eurojust and Latin American countries have discussed expanding future cooperation by establishing Contact Points for judicial cross-border assistance. This has been agreed during a high-level online meeting of the Europe Latin America Technical Assistance Programme against Transnational Organized Crime (EL PAcCTO) and Eurojust. With a future establishment of Contact Points in Costa Rica, the Dominican Republic, Ecuador, El Salvador, Guatemala, Honduras and Panama, Eurojust would be able to count on liaisons with more than 60 partner countries worldwide.

El PAcCTO Director Xavier Cousquer said: ‘One of the primary objectives of the programme is fostering international judicial cooperation and, in this endeavour, building bridges between Latin American countries and the EU is fundamental. In this context, encouraging the setting of formal contacts between Eurojust and various Latin American prosecutor’s offices can be a game-changer for the cooperation between the two regions.’

Eurojust President Mr Ladislav Hamran stated: ‘New Contact Points in the Latin American region are of great importance to Eurojust and to our partners in the Member States. Criminal networks are increasingly operating across countries and continents, so judicial authorities must do the same. Working together on a global scale means that we are better equipped to tackle major international crime.’

Stepping up global cooperation is one of the priorities for Eurojust, and the Agency has been involved in an intense dialogue with EL PAcCTO as of its start in 2017, serving as a gateway to all jurisdictions in the European Union. In recent years, Contact Points have already been established with other El PAcCTO partner countries: Argentina, Bolivia, Brazil, Colombia, Peru, Uruguay and most recently Mexico in October 2020. 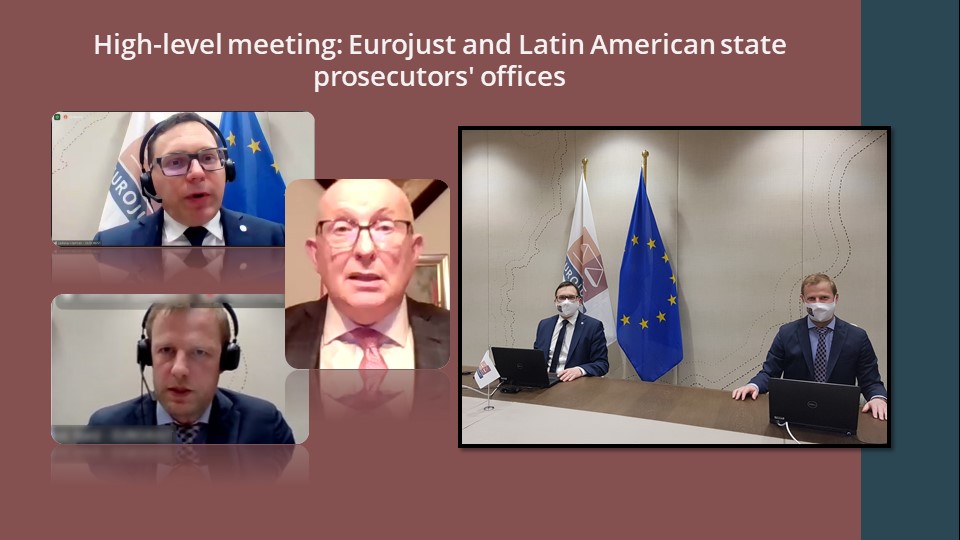 During the meeting, members of the Eurojust Board on Relations with Partners outlined further practical aspects of the collaboration with the partner countries. Furthermore, the more general cooperation of Eurojust with third countries and possible ways of further intensifying the dialogue were discussed.

Contact points (CPs) serve as essential first ways for cooperation with competent authorities in third countries and to establish rapid liaisons between judicial authorities when cross-border crime extends beyond the borders of EU Member States. They could also work alongside judicial authorities and participate in coordination meetings.

CPs are usually appointed by general prosecutor’s offices, national courts or the Ministry of Justice in each respective country. They provide support and vital information in international cases, for instance on how to transmit and execute requests for mutual legal assistance or extradition and follow-up on the execution of such requests. The exchange of purely operational information is excluded from this cooperation unless there are specific instruments or procedures in place that enable the transfer of personal data.

The establishment of Contact Points is often a first step to building further relations with third countries, such as the conclusion of strategic agreements by Eurojust or international agreements by the EU.

EL PAcCTO is an international cooperation programme, funded by the European Union, to reinforce the cooperation between 18 Latin-American countries and the EU in the fight against cross-border crime. It covers the entire criminal justice system, including the judiciary, law enforcement and penitentiary authorities, and was set up in 2017 for an initial period of five years.

Eurojust is the European Union Agency for Criminal Justice Cooperation. Based in The Hague in the Netherlands, it facilitates cross-border judicial cooperation for all 27 EU Member States and the 13 countries with which it has cooperation agreements, covering all areas of major crime. Currently, ten third countries have Liaison Prosecutors at Eurojust. With an increase of Contact Points in Latin America, Eurojust would be able to enhance rapid information exchange with national judicial authorities in more than 60 third countries.