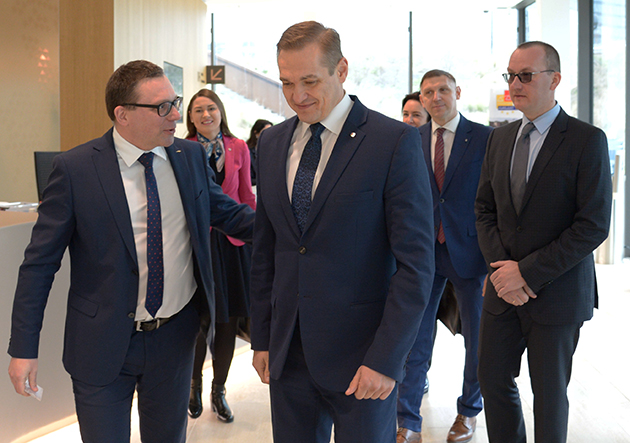 Mr Eimutis Misiunas, the Lithuanian Minister of Interior, visited Eurojust, the EU's Judicial Cooperation Unit, at its premises in The Hague today. Mr Misiunas met with Ladislav Hamran, President of Eurojust, to discuss the benefits and prospects of judicial cooperation at European level. Mr Misiunas stressed the importance of smooth and effective cooperation not only among Member States' and third States' national authorities but also among all Justice and Home Affairs agencies and other key partners in the area of safety and security.

The Lithuanian Minister of Interior acknowledged the significant bridge-making role of Eurojust between different national jurisdictions and legal systems and praised the President for the concrete results produced by Eurojust over the last decades in fighting cross-border organised crime. Mr Misiunas showed particular interest in understanding how Eurojust works in practice and was introduced, inter alia, to the main features and functionalities of Eurojust's unique judicial cooperation tools, i.e. coordination meetings, coordination centres, and most importantly, joint investigation teams.

Mr Misiunas said: 'As I used to be a judge myself, I absolutely recognise and value the role of Eurojust in creating an area of freedom, security and justice in the European Union. Countries differ in their judicial systems, structures and procedures, as well as standards and rules. Eurojust represents an example of how effective cooperation and coordination can be managed and sustained. To maintain security and stability in the European Union and beyond, we share the responsibility to prevent, identify, investigate, and prosecute organised crime. In this regard, I firmly believe that EU agencies can serve Member States and their national authorities in fighting transnational crime, especially now, facing the new challenges of terrorism and cybercrime. Therefore, I strongly support the position of securing today an adequate and sustainable budget for EU agencies for the years to come.'

Mr Hamran stated: 'I warmly welcome Mr Misiunas' visit to Eurojust as Lithuania is an important member of the Eurojust family. I was pleased to present to Mr Misiunas our facilities and explain on the spot how we work, which tools we offer to Member States, and how we improve judicial cooperation across the European Union on a daily basis. Today's visit is a step forward in consolidating the mutual trust between Eurojust and Lithuania, building on Lithuania's commitment to continue investigating and prosecuting cross-border organised crime from a European perspective.'