In a virtual meeting today, Eurojust presented an overview of its activities for evaluation by the Interparliamentary Committee. Eurojust President Mr Ladislav Hamran, Vice-President Mr Klaus Meyer-Cabri and the Liaison Prosecutor for the United States of America, Ms Rachel Miller Yasser, explained in detail how the work of the European Union Agency for Criminal Justice Cooperation is helping to keep European citizens safe. It was the first time since the Eurojust Regulation became applicable in December 2019 that Members of the European Parliament and national parliaments of the Member States convened to evaluate the Agency’s activities. 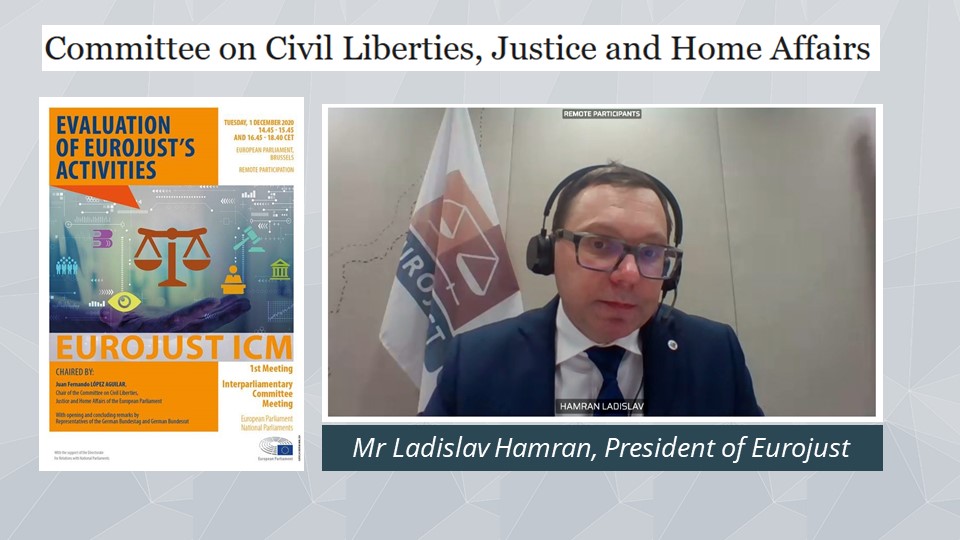 Mr Hamran welcomed the strengthened role of the European and national parliaments in the democratic oversight of Eurojust’s work: ‘I believe it is crucial not only for our Agency but for the EU as a whole that we reinforce the democratic legitimacy of the European institutions, bodies and agencies. Let today be the start of a fruitful and continuous dialogue between Eurojust and you as representatives of the European people.’ Mr Hamran presented the 2019 Annual Report, which showed that judicial authorities across the EU increasingly turn to Eurojust to work together in tackling serious cross-border crime. In just 12 months, the Agency contributed to the arrests of nearly 2 700 suspects, the seizure or freezing of EUR 2 billion in criminal assets and the end of drug trades worth EUR 2.7 billion.

The outbreak of the COVID-19 pandemic in early 2020 once again confirmed the importance of judicial cooperation. Mr Hamran explained how Eurojust continues to be fully operational, ensuring that cross-border crime is tackled and decisive action is taken against criminals abusing the situation: ‘We are incredibly proud of the fact that our support to the Member States was never interrupted. Before the pandemic, prosecutors and judges used to meet face to face at our premises in The Hague. Today, they meet virtually using our IT infrastructure and legal expertise to coordinate major operations.’ Since the beginning of the pandemic, Eurojust has organised 220 coordination meetings (186 of which held via videoconference), 13 coordination centres and supported the establishment of 46 new joint investigation teams. To further support practitioners, Eurojust and the European Judicial Network (EJN) have been compiling information and analysing the main practical and legal issues arising from the current COVID-19 crisis. This compilation is updated biweekly and published as a Council document.

The COVID crisis has also highlighted the need for digitalisation of the judiciary. To this end, Eurojust is working together with the European Commission on the Digital Criminal Justice (DCJ) project, which will create secure communication channels between Eurojust and the Member States, a new information and evidence exchange platform for JITs, a new Case Management System and improvements in the functioning of the Judicial Counter-Terrorism Register. Further elements of the DCJ project will include a hit/no-hit access between Eurojust’s database and those of Europol and the EPPO as well as information exchange channels with Frontex and OLAF. Mr Hamran underlined: ‘It will not be easy to realise these ambitions, but if we want to successfully fight organised crime and terrorism, we have to give prosecutors and judges the tools they need to work together across borders.’

Eurojust Vice-President Mr Klaus Meyer-Cabri informed the Interparliamentary Committee about the future cooperation between Eurojust and the newly created European Public Prosecutor’s Office (EPPO). Two years after the first internal preparations started, Eurojust and the EPPO recently reached a provisional agreement on the text of a working arrangement, the ambition being to finalise the approval procedures and have this arrangement in place by the end of the year. It addresses many different scenarios, including what to do when Member States who are not participating in the EPPO are involved in a case, or when the EPPO does not have competence, or decides not to exercise it. Mr Meyer-Cabri expressed his confidence that this working arrangement will form the basis for the successful practical implementation of the cooperation between Eurojust and the EPPO.