At today’s High-level Conference on the EU Strategy on Victims’ Rights, organised by the European Commission together with the German Presidency, Eurojust’s Vice-President, Mr Klaus Meyer-Cabri, announced that Eurojust is stepping up its engagement for victims’ rights and will take an active part in the new Victims’ Rights Platform. The platform is an important deliverable following the adoption of the first EU Strategy on Victims' Rights earlier this year. The partners of this platform, which include the European Network on Victims' Rights, the EU Network of National Contact Points for Compensation, the EU Counter-Terrorism Coordinator, Eurojust, the European Union Agency for Fundamental Rights and civil society, will serve as an important forum for discussions on victims' rights with all relevant actors.

Vice-President Meyer-Cabri said: "The interest of victims of crime is at the heart of every criminal investigation. Safeguarding their rights and positions can be particularly challenging if the crime is of a cross-border nature. Victims of human trafficking are often reluctant to provide evidence or testify at trial, because they fear retaliation from members of organised criminal groups. They also need support in dealing with the physical and emotional harm they have suffered. Victims of terrorist attacks and their families often face great difficulty in safeguarding their rights to remediation, legal assistance and compensation. Victims of cybercrime may suffer major economic loss but may not be located in the same jurisdiction as where perpetrators have committed the crime. Eurojust has long-standing experience in successfully overcoming any cross-border challenges and will use that very experience in more pronounced ways in the interest and service of victims of cross border crime."

In 2019, Eurojust supported over 8 000 criminal investigations that delivered justice for over 21 000 victims of all forms of serious, cross border crime. The interest of victims is one of the factors that Eurojust considers when advising Member States on judicial issues, such as in the case of parallel proceedings or conflicting European Arrest Warrants/extradition requests. 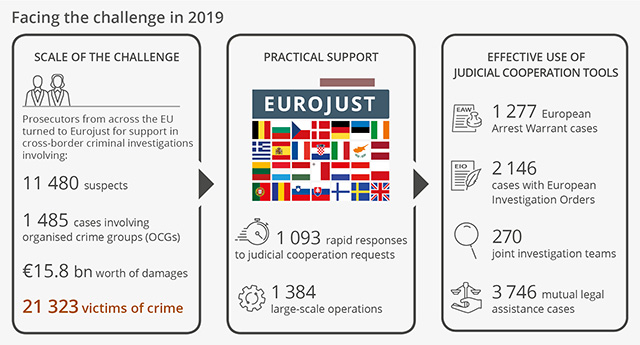 Major Eurojust cases in recent years that focused on the position of victims include: