Between 21-24 November, judicial and law enforcement authorities in Europe launched a joint action against the so-called Islamic State (IS) to disrupt the online activities of this terrorist organisation. 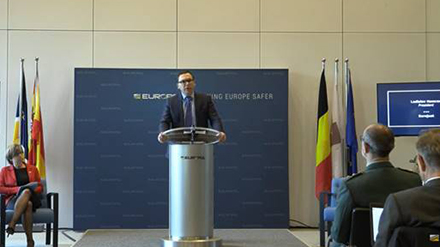 The referral action coordinated by the European Union Internet Referral Unit of Europol, supported by Eurojust, was joined by 12 Member States and 9 online service providers. It led to the referral of a total of over 26 000 items of IS-supporting content. This process is based on the referral by Europol of branded terrorist propaganda to online service providers, which are responsible for evaluating it to establish any potential breach of their terms of service, to ensure that the rule of law is implemented and freedom of speech is safeguarded.

Within this operation, the Guardia Civil carried out an arrest in Spain of an individual suspected of being part of the core disseminators of IS terrorist propaganda online. This arrest was carried out in coordination with the Central Magistrate's Investigating Court number 3 and the Prosecutor's Office of the Audiencia Nacional.

This latest action ties in with a series of previous joint efforts aimed at taking down the various communication assets of this terrorist organisation.

In August 2016, a first takedown was launched against Amaq's mobile application and web infrastructure. This action forced the propagandists to build a more complex and secure infrastructure to prevent further disruption from law enforcement.

In June 2017, a second strike led by the Central Investigating Judge 5 at the Audiencia Nacional with the Guardia Civil and supported by Europol, Eurojust and the USA targeted part of the news agency's web assets and infrastructure. The servers seized by the Guardia Civil allowed for the identification of radicalised individuals in 133 countries, and the detection of more than 200 million accesses to IS propaganda content by 52 000 possible consumers.

In April 2018, a multinational operation led by the Belgian Federal Prosecutor's Office, together with the Belgian Federal Judicial Police of East Flanders, and with the support of Europol's EU IRU, Eurojust and EU Member States, finally took down the web infrastructure of IS, forcing the terrorist propagandists to rely heavily on social media and messaging applications to reach wider audiences online. This shift to online service providers allowed Europol and investigators in Member States to focus their work on the social media networks used by the IS media operatives, resulting in the action days in November 2019.

Europol will continue working towards fostering closer public-private partnerships to ensure the disruption of the dissemination of terrorist online propaganda, and will continue to support law enforcement authorities in EU Member States to address terrorist abuse of the Internet.