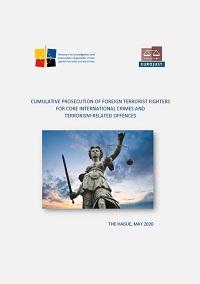 ISIS, which has been classified as a terrorist organisation, perpetrated horrific acts of violence in armed conflicts in Northern Iraq and Syria. The issue of investigating and prosecuting its members and foreign terrorist fighters returning to their countries of origin led most EU Member States to focus on preventing and punishing terrorism-related offences. However, ISIS should not only be considered as a terrorist organisation. ISIS has fulfilled criteria according to International Humanitarian Law as a party to a non-international armed conflict in Iraq and Syria acting as an organised non-state armed group. Therefore, its members and foreign terrorist fighters could be responsible for committing war crimes and other core international crimes.
Existing national jurisprudence of EU Member States and developing national practice demonstrate that it is possible to cumulatively prosecute and hold FTFs accountable for war crimes, crimes against humanity and the crime of genocide, in addition to terrorism-related offences. In some EU Member States, cumulative prosecution (terrorism and war crimes) could take place for the same facts. In others, cumulative prosecution could concern the same person, but for different facts. After the fall of ISIS, more information and potential evidence became available. In order to hold perpetrators accountable for the acts committed, national authorities can cooperate with various stakeholders, ranging from national authorities of other states, UN bodies, civil society, open source information and social media platforms. In addition to international cooperation, judicial response to foreign terrorist fighters also requires comprehensive collaboration on national level. Focusing on both the terrorism aspect of ISIS’s conduct and on core international crimes at national level requires cooperation and coordination on national level between practitioners working in counter terrorism units and war crimes units. Prosecuting terrorism offences combined with acts of core international crimes ensures the full criminal responsibility of perpetrators, results in higher sentences and delivers more justice for victims. By recognising and naming these crimes for what they are, justice can hence be brought to the victims.