Often perceived as a victimless crime, Intellectual Property Crime (IPC) has serious and far-reaching implications for the economy, the environment, and the health and safety of consumers. IPC inflicts significant damage to governments and businesses, as revenue is lost when counterfeit and pirated products are imported and sold in the European Union (EU). Evidence also suggests that there are links between IPC and organised crime, with revenues made from the sale of fake products helping to fuel other forms of crime, such as corruption and drug trafficking.

Despite its nefarious consequences, IPC is often given low priority. Indeed, the prevalence of other serious crimes, limited resources and a high social tolerance towards counterfeit and pirated goods diverts attention away from this crime area.

To strengthen the enforcement of IP rights at EU level, Eurojust and the European Union Intellectual Property Office (EUIPO) signed a Service Level Agreement (SLA) aimed at boosting cooperation and ensuring a more coherent and robust response against IP infringements across the EU in March 2021. The SLA, which is in force for a four-year period (2021-2024), provides Eurojust with extra funding to develop and implement the IPC Project.

The IPC Project at Eurojust aims to enhance judicial action against counterfeiting, piracy and other IP infringements, and also help the EUIPO enforce IP rights. To that end, it focuses on building, promoting and exchanging knowledge, tools and expertise, as well as on awareness raising and the provision of enhanced legal and operational support to complex cross-border IPC investigations. 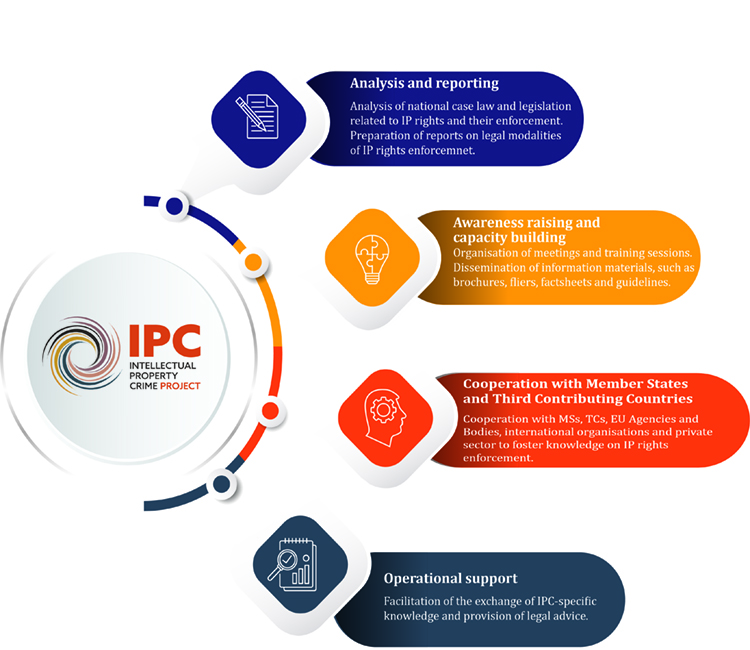 Analysis and reporting: analysing case law and key pieces of legislation offers a better understanding of how IP crimes are regulated and enforced at national and EU level. Reports and comparative analyses prepared by the IPC Project, and shared with judicial authorities, dive deeper into the relevant aspects of IP crime, highlight how key issues are handled in courts and help to share existing legal knowledge. By engaging with law enforcement and judicial authorities, the Project can look more closely at the crime landscape and assess how current trends and new developments will translate into emerging legal issues for the prosecution and courts in the future.

Awareness raising and capacity building: increasing the profile of IPC within the judiciary and strengthen practitioners’ knowledge base will result in more cases being identified and successfully prosecuted. To that end, the Project produces factsheets and other materials on emerging or recurrent IPC issues. It also organises workshops, webinars, conferences and training activities to enable prosecutors and judges to exchange knowledge and best practices, acquire new expertise and tools, and to keep the judicial community up to date on current and future developments.

If you are a member of law enforcement or the judiciary in an EU Member State or a country that has a cooperation agreement with Eurojust and you would like to request training on a particular IPC-related topic, please contact us on: IPCrime@eurojust.europa.eu

Cooperation with stakeholders: the work conducted by the Project serves to build closer cooperation with national authorities and other relevant actors. These include EU Member States and third countries (TCs), EU agencies and bodies, such as Europol (AP Copy) and OLAF, international organisations, including WIPO and Interpol and, where required, private sector representatives. Through the IPC Project, Eurojust is also a member of the EMPACT Operational Action Plan on IP crime, counterfeiting of goods and currencies. Eurojust adds value to EMPACT by bringing to it a judicial perspective and supporting Member States (MSs) and participating TCs in their operational efforts to disrupt and dismantle organised crime groups involved in counterfeiting and piracy.

Support to Eurojust's operational work: the IPC Project provides support by facilitating the exchange of IPC-specific knowledge, including on criminal business models. It also helps to identify and locate the appropriate private sector rights holder and other information relevant to the cases dealt with by Eurojust and the National Desks.

The country fiches provide a list of the national criminal codes and related legislation regulating IP crimes as well as list of national institutions responsible for the investigation and prosecution of IP crimes. The country fiches offer an overview of the national legislation in each Member State and affiliated third country based on general definitions of IP rights and criminal offences. The aim is to help practitioners better understand national approaches to IP regulation and demonstrate how these differ across countries. It also provides a tool to compare the legislation of different countries.

The national contact catalogue lists the institutions in each EU Member State and third country, briefly describes their mandate and provides general contacts details along with the respective website.
IPC - National contacts

The Project monitors main developments in the area of IP enforcement and prepares factsheets, flyers and other informational materials to assist law professionals in investigating and prosecuting IPC.

Each year, the IPC Project issues a report with short analyses of the jurisprudence of national courts on IP crimes, and provides summaries of the judgements in English. The report aims to identify the elements of various IP-related criminal offences, and show how these are settled in national courts. The report intends to facilitate judicial and law enforcement authorities’ access to IP-related criminal case law.

The case law analysis conducted by the Project complements the EUIPO’s e-Search Case Law database, which contains a large collection of analyses of national judgments on IP, mostly related to civil law cases.

The IPC project prepares reports and studies on a number of topics related to IP crimes. These reports and studies provide an in-depth analysis of various IP criminal offences, such as counterfeiting, online piracy, the unauthorised use of trade secrets and other relevant subjects. The reports also include the analysis of national legislation to highlight differences in defining and regulating IP-related criminal offences and show how these are reflected in national jurisprudence.

Intellectual property prosecutors from the EU and beyond meet at Eurojust