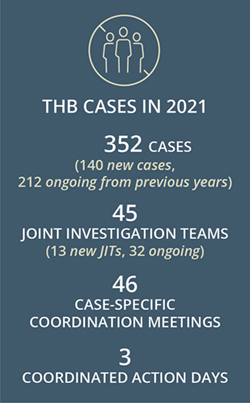 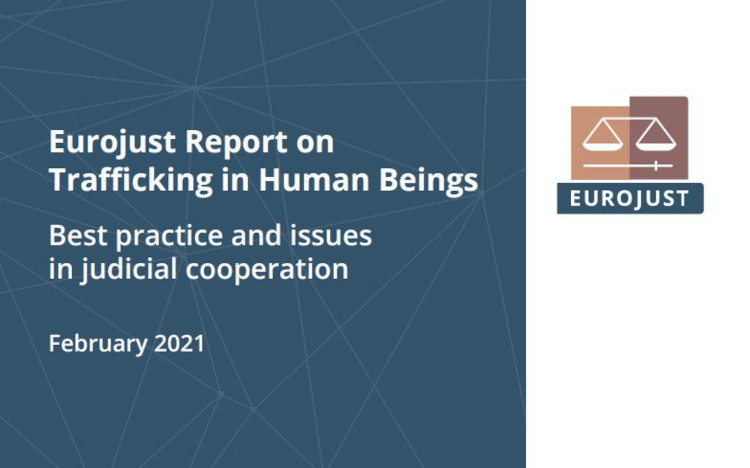 The many sensitivities around THB cases, combined with the often complex nature of these activities, present clear challenges to national authorities during the investigation and prosecution stage. The crimes are typically committed by organised crime groups (OCGs) who may have ample resources and sophisticated ways of working, and whose profits may be hard to track and confiscate.

Furthermore, THB activities are, by their very nature, transnational, often taking place across multiple jurisdictions, while the involvement of non-EU states may create additional difficulties for national authorities in the Member States. Identifying, locating and convincing victims to cooperate with law enforcement/judicial authorities in order to bring perpetrators to justice remains an important challenge in many proceedings.

Supporting judicial authorities in the fight against trafficking in human beings

In 2020, Eurojust supported more than 8 800 criminal investigations, contributing to justice being delivered for nearly 95 000 victims of all forms of serious, cross-border crime. The interests of victims is one of the factors Eurojust considers when advising Member States on judicial issues, such as in the case of parallel proceedings or conflicting EAWs/extradition requests. The impact on victims is a particularly central element of Eurojust’s cases addressing trafficking in human beings.

PUBLICATION DATE:22 December 2021
The Eurojust annual meeting on Migrant Smuggling (“the meeting”) was organised by Eurojust on 4 and 5 November 2021. Due to the current COVID-19 pandemic situation in Europe, the meeting took place in a hybrid format, with some participants on site at Eurojust premises and others online via video...

PUBLICATION DATE:27 October 2021
An organised crime group (OCG) in Romania, Austria and the United Kingdom allegedly forced its victims into prostitution, using the so-called 'loverboy' approach, where young men tempt women from deprived backgrounds to work for them. It is also alleged that the suspects subjected the victims to...

PUBLICATION DATE:27 October 2021
An organised crime group (OCG) in Romania and Finland allegedly ran a network for the sexual exploitation of around ten women. The suspects recruited their young female victims from poorer rural areas of Romania for sexual exploitation in Finland, often under false pretences. November 2020 – Thanks...

PUBLICATION DATE:27 October 2021
THB cases registered There was a slight increase in case numbers in the period 2016-2020. The number of THB investigations and prosecutions coordinated by Eurojust nevertheless remains low considering the large number of victims and suspects in the EU. Victims of human trafficking THB cases...

PUBLICATION DATE:18 October 2021
Trafficking in human beings (THB) is a serious and fast-growing crime area that affects millions of innocent people around the world and involves the severe violation of fundamental human rights. Human traffickers control and exploit vulnerable victims and make use of threats, force, fraud...

PUBLICATION DATE:18 October 2021
This report of the JHA agencies’ network aims to make Member States more aware of the agencies’ potential in helping the early identification and protection of victims and to encourage Member States to work closer with the agencies in this area. The report responds to one of the key actions of the...

PUBLICATION DATE:23 February 2021
Cross-border cases of trafficking in human beings (THB) are complex and difficult to investigate and prosecute. They reveal the prominent role of organised criminal groups. When gaps in judicial cooperation appear it is the victims of THB who suffer. In October 2020, the European Commission noted in...

PUBLICATION DATE:12 November 2020
Sometimes people gain unlawful access to the European Union (EU) through a marriage of convenience. Increasingly, such sham marriages are part of sophisticated fraud schemes arranged by Organised Crime Groups (OCGs). The OCGs engage in migrant smuggling and trafficking of human beings on an...
Related tags: Trafficking in human beings