The Finnish Desk is headed by Lilja Limingoja, who is the National Member for Finland since August 2019.

In 2021, the Finnish Desk was involved in 134 new cases, 15 coordination meetings, and 11 joint investigation teams.

Lilja Limingoja was appointed National Member for Finland on 1 August 2019. Prior to her appointment, she served as Assistant to the National Member for Finland. Before coming to Eurojust, Ms Limingoja worked as a district prosecutor, specialised in economic crime, since 2003. She has also been a member of a group of prosecutors responsible for training economic crime investigators, customs officers, tax officers, attorneys, judges and prosecutors. Ms Limingoja worked as Seconded National Expert at Eurojust from February until July 2014 and served as Contact Point for the European Judicial Network prior her appointment as National Member.

It is a unique working place, with people from all the Member States. They partly have the same background because of their professions, but these backgrounds also vary a little, because they come from different countries. I think what strikes me most about Eurojust is that everybody is so engaged to work on the issues and tasks that confront the organisation.

This is difficult because I only joined Eurojust in August of 2019. However, there was an ongoing case involving money laundering that I was partly involved in. In 2018, an organised crime group was selling non-existent luxury goods on fake online trading platforms. They used bank accounts in Ireland and Finland to receive the money and then withdrew it from cashpoints in different European countries.

With Eurojust’s help, Finland and Ireland set up coordination meetings. They agreed on a prosecutorial strategy and issued mutual legal assistance requests. In the end, three of the criminals were convicted in Finland for money laundering and another nine were arrested in Ireland. The authorities in Finland and Ireland also seized equipment for document forgery, laptops and cash.

Contact information is available on the intranet of the National Prosecution Authority. 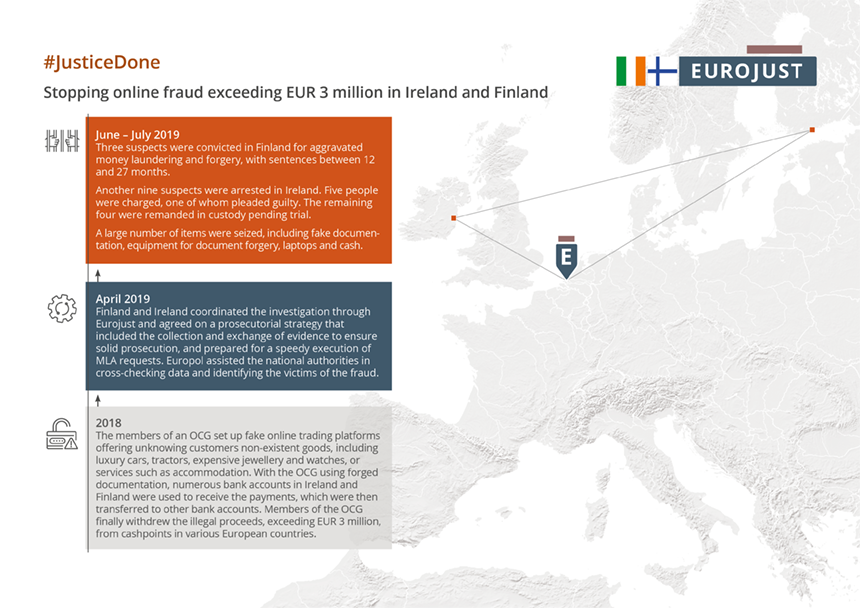 Major action in Romania against thefts from moving trucks