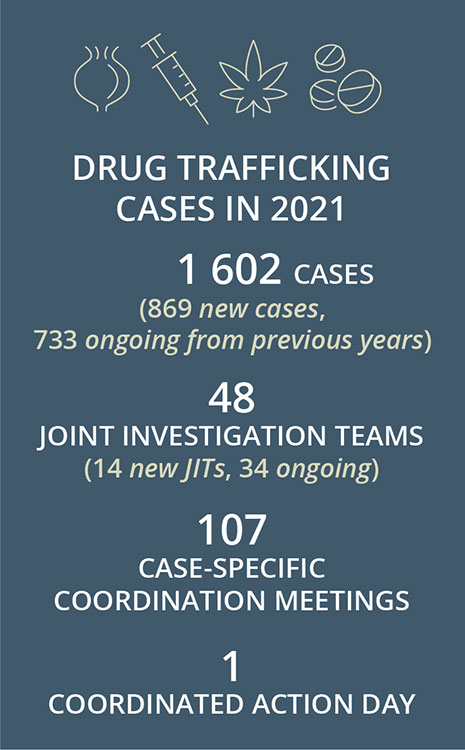 Drug trafficking is an especially complex form of criminal activity, frequently involving multiple States and often overlapping with other offences, including financial crime and cybercrime. The fight against drug trafficking relies on effective operational cooperation between law enforcement and judicial authorities.

Eurojust helps national authorities to dismantle transnational drug trafficking networks and bring perpetrators to justice. The Agency aims to enhance cross-border cooperation to identify the entire criminal network and provides advice on how to use European judicial instruments and avoid conflicts of jurisdiction. Eurojust also facilitates efforts to detect and seize illegal substances, for example in the framework of a joint investigation team (JIT), and can help investigators to gather and exchange crucial information and evidence. 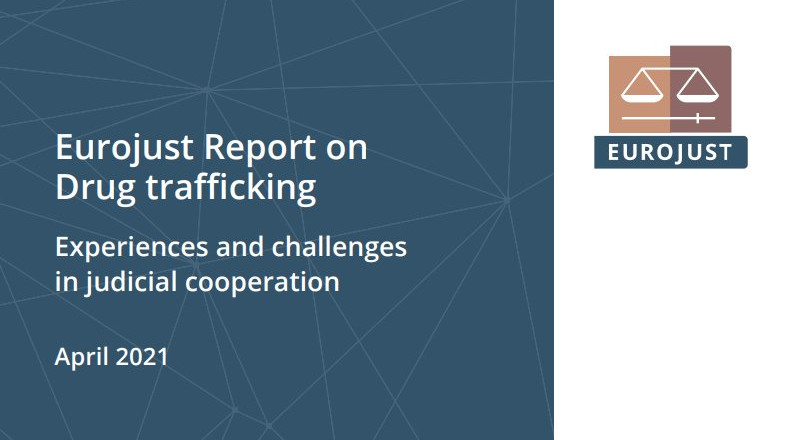 Drug trafficking is a form of organised crime that continues to have major implications for the safety and well-being of EU citizens and society as a whole – through the corruption of officials, the laundering of the proceeds in the legal economy and environmental pollution from the waste of illicit drug production. Judicial cooperation in the fight against drug trafficking is essential and must involve all national authorities in the criminal justice system, from police, border and customs authorities to prosecutors, judges and prison authorities.

National authorities face a number of obstacles in judicial cooperation, however. Differences in substantive and procedural law can cause delays or even refusals to execute mutual legal assistance (MLA) requests, for example when the quantity of drugs involved is not considered significant by a Member State or when the substance in question is not illegal in a Member State. The same differences can also present obstacles to effective cooperation in the area of controlled deliveries – when consignments are allowed to cross State borders so authorities can identify those involved in the entire chain of the drug trafficking. 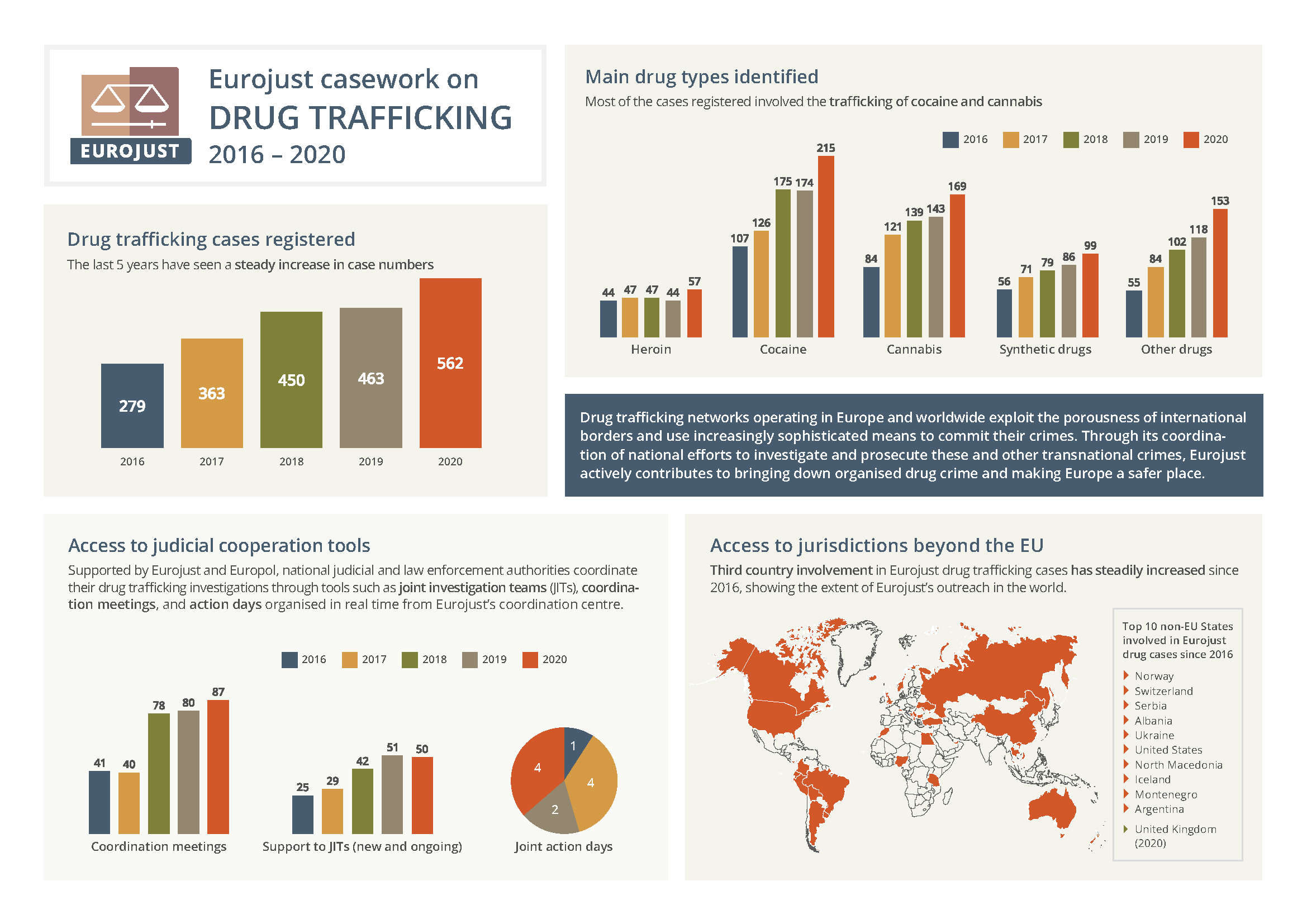 In drug trafficking cases, parallel investigations are particularly common. Cooperation between different national investigations ensures detection and disruption of the entire criminal organisation by prosecuting all phases of the drug trade (planning/organising, financing, production, processing, transport and distribution of drugs).

Eurojust encourages investigating the financial aspects of the drug trade to ensure that financiers and money launderers are also indicted and the assets of the members of the criminal organisation are seized. Some of the key judicial instruments facilitated by Eurojust include the European Investigation Order (EIO) and the European Arrest Warrant (EAW). Eurojust also assists in finding a solution to judicial problems related to special investigative techniques such as controlled deliveries, undercover operations and cross-border surveillance of members of organised crime groups (OCGs).

Eurojust holds coordination meetings where national authorities have an opportunity to meet and exchange information about the case, for example on the international network of the drug-trafficking OCG.

New Psychoactive Substances (NPS) and (pre)precursors have become a rising area of concern to national Prosecution authorities. A new psychoactive substance is defined as 'a new narcotic or psychotropic drug, in pure form or in preparation, that is not controlled by the United Nations drug conventions, but which may pose a public health threat comparable to that posed by substances listed in these conventions'.

The most common challenges in cases about NPS are:

Eurojust’s early involvement in NPS-related investigations and prosecutions helps to find case-specific and tailor-made cross-border solutions. In June 2018, Eurojust published an analysis report on judicial cooperation in NPS, which focuses on developments in Member States’ legislation, casework and operational experience with regard to the investigation and prosecution of NPS. The report is available to view here.

The involvement of third countries in drug trafficking cases is essential, particularly because the cultivation, production and transit process often involves third countries. Eurojust therefore encourages Member States to establish connections with third countries and facilitates this process. Inviting these countries to attend coordination meetings at Eurojust can be helpful in discussing legal and practical obstacles and finding solutions. Third countries with a cooperation agreement may post a Liaison Prosecutor to Eurojust to work side by side with National Members. Currently, 10 Liaison Prosecutors are posted at Eurojust. The Agency also has a network of Contact Points in judicial authorities in more than 50 countries all over the world.

Eurojust publishes information on its work in the fight against drug trafficking as part of its efforts to develop best practice and provide encouraging examples of the results of successful cooperation of the judicial authorities in combatting this crime type. For example, the January 2015 Implementation Report of Eurojust’s Action Plan on Drug Trafficking details Eurojust’s progress in enhancing its work. The report is based on data from a quantitative analysis of information on drug trafficking cases recorded in the Eurojust Case Management System (CMS). 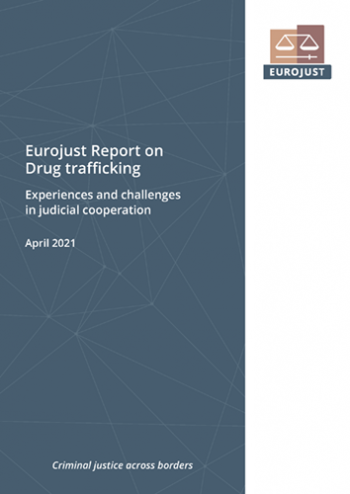 In April 2021, the Agency published the Eurojust Report on Drug Trafficking. This report provides an overview of legal and operational challenges in international judicial cooperation on drug trafficking crime cases. It also presents best practices to overcome these challenges, drawn from the practical experience of Eurojust’s support for drug trafficking casework between 2017 and 2020 (1 838 cases).

Successful takedown of drug trafficking network in Italy and Albania

10 arrests following a controlled delivery of drugs across Europe(Infographic)

PUBLICATION DATE:27 October 2021
Drug trafficking networks operating in Europe and worldwide exploit the porousness of international borders and use increasingly sophisticated means to commit their crimes. Through its coordination of national efforts to investigate and prosecute these and other transnational crimes, Eurojust...

PUBLICATION DATE:01 May 2021
An organised crime group (OCG) involving at least 20 individuals, led by a Lithuanian national, had been operating a complex transport and distribution network since 2015, selling heroin in Ireland and the UK.

PUBLICATION DATE:19 April 2021
Drug trafficking remains a highly lucrative market worldwide, with an estimated value of EUR 30 billion per year in the European Union alone. The overall impact on societies has dramatic consequences – for healthcare, governance, economics and other indirectly affected areas. This impact also...

Operation Los Blancos : The dismantling of one of Europe’s most active Albanian cocaine trafficking networks(Infographic)

Stopping the trafficking of a heroin substitute in France, Poland and Ukraine, including the planning and execution of a controlled delivery(Infographic)

PUBLICATION DATE:20 June 2018
The first part of this joint report is aimed at policymakers. It lists four challenges in NPS control, and then describes the different legislative solutions used in many of the Member States. Focusing on the innovative new laws that are designed to address the issue, the report gives the reader a...