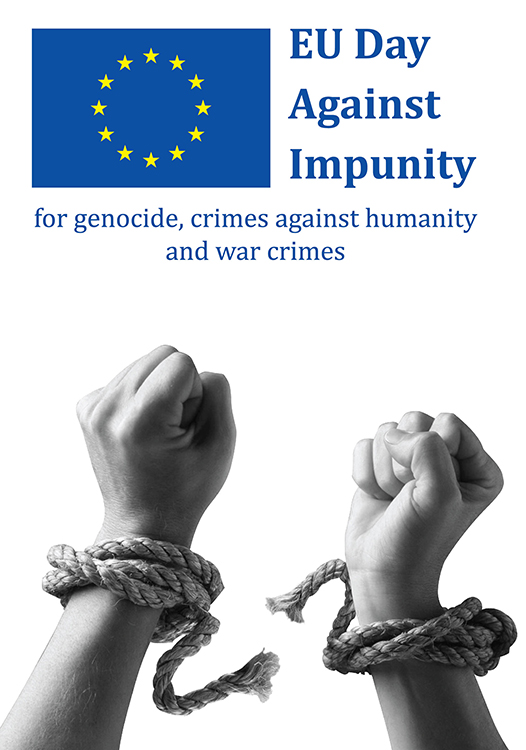 At the same time, the EU Day against Impunity is intended to promote national investigations and prosecutions, to formally recognise the common efforts of the EU Member States and the European Union in enforcing international criminal law, to address the position and participation of victims in criminal proceedings for these crimes, and to reinvigorate Europe-wide commitment to the continuing fight against impunity for these crimes.

The report on the 5th EU Day against Impunity is available here.

The report on the 4th EU Day against Impunity is available here.

The third edition of the EU Day against Impunity, organised by the Bulgarian Presidency of the Council of the European Union in close cooperation with the European Commission and the Genocide Network, was held on 23 May 2018 at the premises of the International Criminal Court. On the 20th anniversary of the Rome Statute, it was an important occasion to acknowledge the efforts of the European Union to end impunity.

The report on the 3rd EU Day against Impunity is available here.

On 23 May 2017, the Maltese Presidency of the Council of the European Union hosted the second EU Day against Impunity for genocide, crimes against humanity and war crimes in Brussels, in cooperation with the European Commission and the Genocide Network.

The report on the 2nd EU Day against Impunity is available here.

The first annual EU Day against Impunity for genocide, crimes against humanity and war crimes took place on 23 May 2016 in The Hague, under the Dutch EU Presidency.

The report on the 1st EU Day against Impunity is available here.