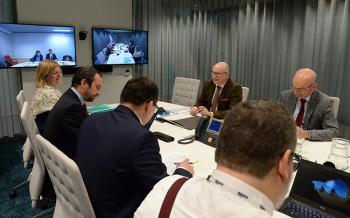 Eurojust’s Executive Board assists the Eurojust College in its management functions. It oversees the necessary preparatory work of the Administrative Director on administrative matters for adoption by the College, and it takes administrative decisions that are explicitly described in Article 16 of the Eurojust Regulation.

Eurojust will invite the European Public Prosecutor’s Office (EPPO) to participate without the right to vote in Executive Board meetings that are of relevance to its functioning.

The current members of the Executive Board are:

The Executive Board is in charge of:

The members of the Board meet at least once a month, though meetings may also take place more frequently at the initiative of its chairperson, at the request of the European Commission, or at the request of at least two of its other members. During meetings, the Executive Board makes decisions by a majority of its members. Each member has one vote, with the Eurojust President placing the casting vote in the event of a tie.

Eurojust’s Administrative Director also attends the meetings of the Executive Board without voting rights. The European Public Prosecutor’s Office (EPPO) may also participate, without the right to vote, in meetings which are of relevance to its functioning.