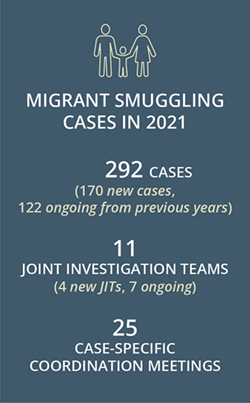 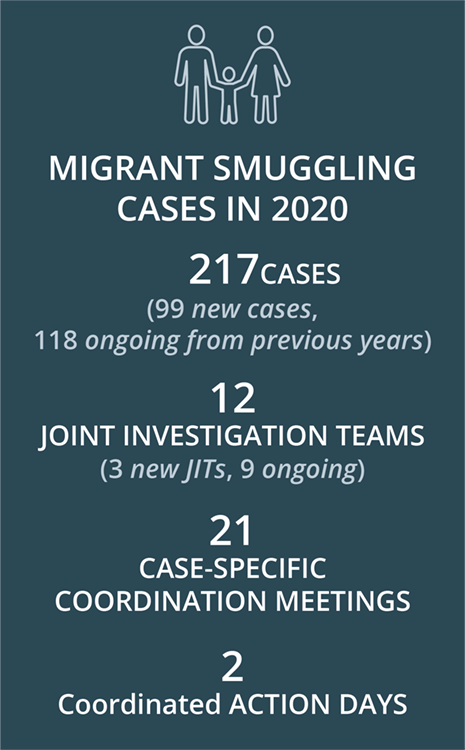 The nearly 220 cases focusing on migrant smuggling investigations coordinated through Eurojust in 2020, often in close cooperation with Europol, aimed to cover criminal activity along all major migrant smuggling routes to the European Union. In addition, Eurojust launched a Focus Group for Prosecutors on Migrant Smuggling and published a new casework report that analysed cross-border investigations tackling sham marriages, since such marriages of convenience are one of the main forms of facilitating irregular migration.

The cases regularly involve the full participation of third countries. Eurojust has designated contact points in non-EU countries with whom it can liaise at both strategic and operational level in specific cases. Further, Eurojust helps involved authorities to develop links with relevant European and international organisations such as EUNAVFOR MED, the EMSC, Frontex and UNODC. 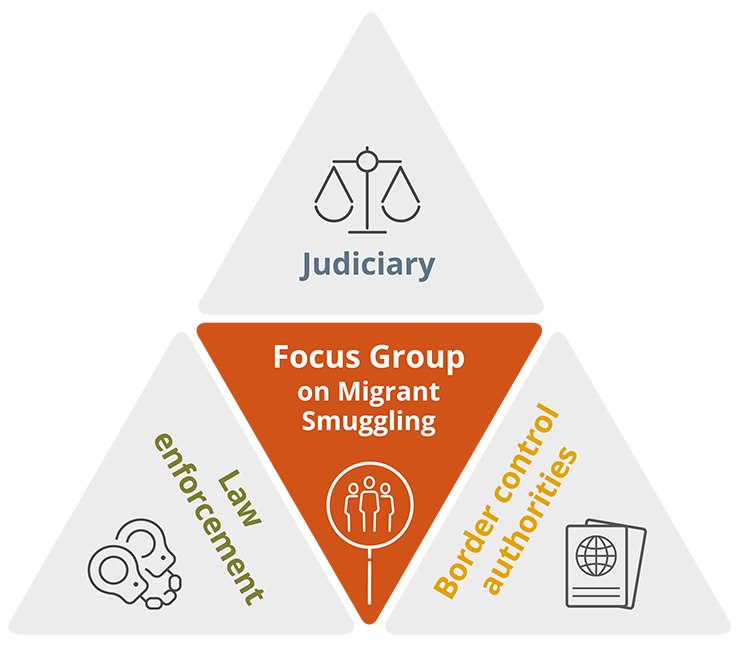 Eurojust’s international role in the fight against migrant smuggling

PUBLICATION DATE:14 December 2022
The Eurojust annual meeting on Migrant Smuggling was organised by Eurojust on 19 and 20 October 2022 and represented the largest meeting ever of prosecutors who specialise in tackling migrant smuggling. More than 80 practitioners - prosecutors and investigative judges - from 34 countries and...

PUBLICATION DATE:13 May 2022
This introductory leaflet describes the migrant smuggling challenge in the EU, and Eurojust’s role in addressing it. It highlights the work of the Migrant Smuggling Focus Group coordinated by Eurojust, composed of specialised investigating judges and prosecutors from across the EU Member States and...

PUBLICATION DATE:22 December 2021
The Eurojust annual meeting on Migrant Smuggling (“the meeting”) was organised by Eurojust on 4 and 5 November 2021. Due to the current COVID-19 pandemic situation in Europe, the meeting took place in a hybrid format, with some participants on site at Eurojust premises and others online via video...

PUBLICATION DATE:23 October 2021
The aim of this booklet is to present an overview of the legal frameworks in the different EU Member States and in countries with which Eurojust has a cooperation agreement. The focus is on the use and legal nature in judicial proceedings of statements obtained from debriefed migrants at EU external...

12 arrested for smuggling migrants across the English channel(Infographic)

PUBLICATION DATE:01 April 2021
The organised crime group (OCG), consisting mainly of Iranian nationals living in France, the Netherlands and the UK, endangered the lives of hundreds of migrants while transporting them from France to the UK, across one of the world's busiest commercial shipping lanes, in overloaded small boats and...

PUBLICATION DATE:12 November 2020
Sometimes people gain unlawful access to the European Union (EU) through a marriage of convenience. Increasingly, such sham marriages are part of sophisticated fraud schemes arranged by Organised Crime Groups (OCGs). The OCGs engage in migrant smuggling and trafficking of human beings on an...