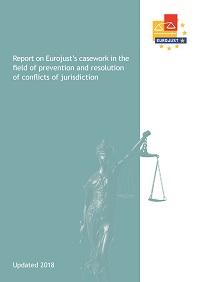 Eurojust Report on the transfer of proceedings in the European Union 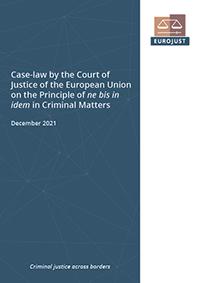 Eurojust Report on the transfer of proceedings in the European Union

PUBLICATION DATE:18 January 2023
Transfers of proceedings serve the interests of the effectiveness of justice, as they help resolve issues related to concurrent jurisdictions by several Member States in relation to the same offences, while also respecting fundamental rights of the accused. Despite its crucial function, there is...

Eurojust Written Requests on Jurisdiction in a Nutshell

PUBLICATION DATE:29 September 2021
Eurojust written requests (or recommendations) are issued by National Members to assist national authorities when jurisdictional issues arise between two or more Member States. They are based on Article 4(2)(b) of the Eurojust Regulation and fall within the autonomous initiative powers of Eurojust...

Eurojust Written Recommendations on Jurisdiction: Follow-up at the National Level

PUBLICATION DATE:29 September 2021
Eurojust written requests (or recommendations) are issued by National Members to assist national authorities when jurisdictional issues arise between two or more Member States. They are based on Article 4(2)(b) of the Eurojust Regulation and fall within the autonomous initiative powers of Eurojust...

PUBLICATION DATE:16 February 2018
This report provides an update of a report issued in 2015 concerning Eurojust’s experience in the field of prevention and resolution of conflicts of jurisdiction. The report is based on Eurojust’s casework, a College thematic discussion, meetings organised or co-organised by Eurojust and...

PUBLICATION DATE:18 January 2017
In this issue, you will find information on the key concepts concerning conflicts of jurisdiction and ne bis in idem, and the role of the European Union, and specifically Eurojust, in resolving the obstacles encountered. Interviews with prosecutors experienced in international judicial cooperation...

PUBLICATION DATE:13 December 2016
To prevent and support the settling of conflicts of jurisdiction that could result in an infringement of the principle of ne bis in idem, and to ensure that the most effective practices with regard to criminal proceedings are in place in the European Union (EU), in 2003 Eurojust published the...

PUBLICATION DATE:04 June 2015
This report concerns Eurojust’s experience in the field of the prevention and resolution of conflicts of jurisdiction, in particular, in the period from 2009 to 2014. The report is based on Eurojust’s casework, seminars organised or co-organised by Eurojust and contributions made by Eurojust. The...

PUBLICATION DATE:04 June 2015
The strategic seminar ‘Conflicts of Jurisdiction, Transfer of Proceedings and Ne Bis in Idem: Successes, Shortcomings and Solutions’, jointly organised by Eurojust and the Latvian Presidency of the EU, took place on 4 June 2015. The seminar was organised in combination with the 9th Meeting of the...
Related tags: Conflicts of jurisdiction