At the same time, the EU Day Against Impunity is intended to promote national investigations and prosecutions, to formally recognise the common efforts of the EU Member States and the European Union in enforcing international criminal law, to address the position and participation of victims in criminal proceedings for these crimes, and to reinvigorate Europe-wide commitment to the continuing fight against impunity for these crimes.

On 23 May 2022, the French Presidency of the Council, the European Commission, Eurojust and the Genocide Network marked the 7th EU Day Against Impunity. It was devoted to a practical assessment of the 2014 Strategy of the EU Genocide Network to combat impunity for the crime of genocide, crimes against humanity and war crimes. Faced with an unparalleled crisis since the entry into force of the Rome Statute of the International Criminal Court, are the EU, its Member States, and partners up to the task of achieving justice for atrocities perpetrated in Syria, Ukraine and elsewhere? Are national authorities prepared to tackle an ever-increasing and complex caseload? Looking at the state of play of the fight against impunity in the EU and Member States, the 7th EU Day Against Impunity offered a platform to reflect on major achievements in the last few years and to identify remaining gaps. 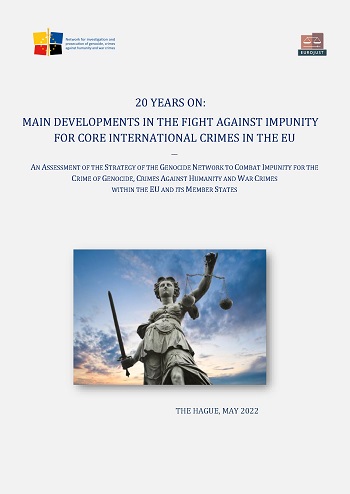 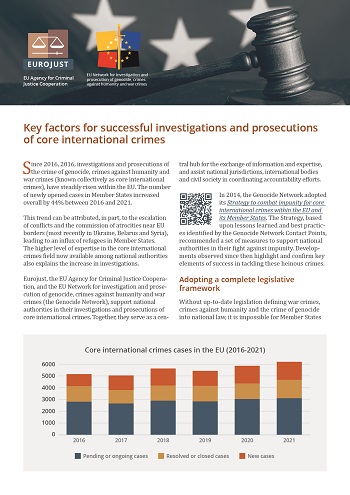 On the occasion of this 7th edition of the EU DAI, the Genocide Network has published two new publications:

A live webinar on 23 May brought together key actors in the fight against impunity to discuss this year’s topic:

On the frontline of justice: preparedness of the EU and Member States in fighting impunity for core international crimes

The sixth edition of the EU Day against Impunity once again took place in an online format, due to the COVID-19 restrictions. The event benefited from the cooperation of the Portuguese Presidency, the European Commission, the Genocide Network and Eurojust.

The event was launched on 21 May 2021 with a 35 minute-long video published on Eurojust’s YouTube channel. This year, the EU Day Against Impunity revolved around the work done by the EU and Member States to ensure accountability for core international crimes committed in Syria since 2011. The video featured Syrian victims and the civil society, prosecutors from France, Germany, the Netherlands and Sweden, as well as national authorities and representatives of EU bodies and agencies. Each speaker shortly presented challenges and successes of current and future trials in national courts, addressed victims’ expectations, and explained why justice matters. The video was built around three questions, to which speakers answered in turn: what has been the EU response? How do Member States bring cases to court? And what does it mean for the victims?

The video was posted on Eurojust’s YouTube channel, with English and Arabic subtitles available.

Outreach for the event was conducted on various channels, including social media (LinkedIn, Twitter) and traditional media outlets. This greatly amplified the message that the EU and its Member States will not look the other way when core international crimes have been or are being committed.

See the report on the 5th EU Day Against Impunity.

See the report on the 4th EU Day Against Impunity.

The third edition of the EU Day Against Impunity, organised by the Bulgarian Presidency of the Council of the European Union in close cooperation with the European Commission and the Genocide Network, was held on 23 May 2018 at the premises of the International Criminal Court. On the 20th anniversary of the Rome Statute, it was an important occasion to acknowledge the efforts of the European Union to end impunity.

See the report on the 3rd EU Day Against Impunity.

On 23 May 2017, the Maltese Presidency of the Council of the European Union hosted the second EU Day Against Impunity for Genocide, Crimes Against Humanity and War Crimes in Brussels, in cooperation with the European Commission and the Genocide Network.

See the report on the 2nd EU Day Against Impunity.

The first annual EU Day Against Impunity for Genocide, Crimes Against Humanity and War Crimes took place on 23 May 2016 in The Hague, under the Dutch EU Presidency.

See the report on the 1st EU Day Against Impunity.