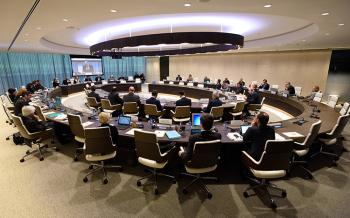 The College is responsible for the organisation and operation of Eurojust. It holds regular meetings to discuss and vote on Eurojust’s activities, as well as other issues of relevance. The Eurojust College is formed of the National Members, one from each of the EU Member States (with the exception of Denmark, which by virtue of Protocol No 22 is not bound by the Eurojust Regulation), who include judges, prosecutors or other judicial professionals of equivalent competence.

In carrying out its tasks, the College holds regular meetings to discuss and vote on Eurojust’s activities and other relevant issues. In addition to the National Members and Commission representative, College meetings are also attended by Eurojust’s Administrative Director, who does not have voting rights. Further, the European Public Prosecutor’s Office (EPPO) may also participate, without the right to vote, in meetings that are of relevance to its tasks, while other parties whose opinion may be of interest to Eurojust may be invited to specific meetings as observers.

During College meetings, unless stated otherwise, and where a consensus cannot be reached, the College takes its decisions by a majority of its members. Each Member of the College has one vote, which passes to their deputy in their absence.