Further, Eurojust must be informed in cases when a Member State (in exceptional circumstances) cannot observe the time limits (Article 17 EAW Framework Decision). See further information on the transmission of information to Eurojust. 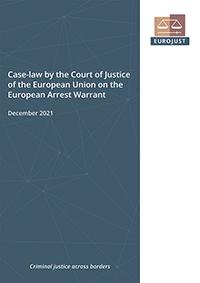 The tools mentioned below give judicial authorities quick access to:

In addition to the Guidelines for deciding on competing requests for surrender and extradition, Eurojust has developed information to help practitioners in the application of EAW cases. The updated document Case-Law by the Court of Justice of the European Union on the EAW offers practitioners an overview of relevant judgments in the field of the EAW.

Further, the Reports on Eurojust’s Casework in the field of the EAW (see the most recent one) provide useful insight in challenges encountered in Eurojust cases and offer examples of best practices to prevent and/or overcome difficulties in the execution of EAWs.

Moreover, Eurojust published a Questionnaire on the CJEU’s judgments in relation to the independence of issuing judicial authorities and effective judicial protection.

Stark increase in demand for Eurojust expertise on European Arrest Warrant, with number of cases doubling

The Impact of COVID-19 on Judicial Cooperation in Criminal Matters