The Slovenian Desk is headed by Boštjan Škrlec, who is the National Member for Slovenia since July 2017 and Vice-President of Eurojust since November 2020.

In 2021, the Slovenian Desk was involved in 275 new cases, 9 coordination meetings, and 6 joint investigation teams.

Boštjan Škrlec was appointed National Member for Slovenia in July 2017. He was elected as one of the two Vice-Presidents of Eurojust in November 2020. Mr Škrlec has over 20 years of experience in the judiciary and began his career as a State Prosecutor in 1999. Before joining Eurojust, he was Director General at the Supreme State Prosecutor's Office of the Republic of Slovenia. During his professional career, he has been involved in international relations and cooperation. He participated in numerous international projects and worked with international institutions in the field of criminal justice. He has been a member of the Committee of Experts on the Evaluation of Anti-Money Laundering Measures (MONEYVAL) at the Council of Europe since 2005, and is currently participating in the work of its European Committee for the Prevention of Torture and Inhuman or Degrading Treatment or Punishment (CPT).

In 2007, during the Slovenian EU Presidency, Mr Škrlec chaired the working group negotiating the Council Decision on the strengthening of Eurojust. From 2008 to 2012, he served as the State Secretary at the Ministry of Justice of the Republic of Slovenia. He actively participated in preparation and adoption of legislation introducing important reforms, such as the introduction of plea-bargaining in criminal procedure and the establishment of the Specialised State Prosecutor's Office of the Republic of Slovenia.

Boštjan Lamešič was appointed Deputy National Member for Slovenia at Eurojust in February 2020, after performing the function of an Assistant to the National Member for Slovenia since March 2012. Before joining Eurojust, he worked as a State Prosecutor at the Supreme State Prosecutor's Office of the Republic of Slovenia. Prior to this, he worked at various District Prosecutor’s Offices as well as at the Specialised State Prosecutor's Office of the Republic of Slovenia. During his career in prosecution service, he dealt with complex and outstanding cases. He specialises in financial/economic crime and corruption.

Anita Veternik has been Assistant to the National Member for Slovenia since September 2020. She started her career at the District State Prosecutor’s Office in Kranj. Prior to joining Eurojust, she was seconded to the Supreme State Prosecutor’s Office of the Republic of Slovenia, where she was assigned to the Criminal Affairs Department, mainly responsible for monitoring the legislative progress in the field of e-evidence and cross-border cooperation, data retention and virtual currencies. She was also assigned to the Centre of Expertise and IT, where she was involved in various projects, including the upgrading of the information system for the Slovenian State Prosecution Service. Ms Veternik is a member of the working group at the Supreme State Prosecutor’s Office, responsible for the preparation of the grounds relating to setting up the European Public Prosecutor’s Office in Slovenia. She is a contact point in the European Judicial Cybercrime Network and a Governmental Expert for the UNCAC Review Mechanism.

The Slovenian Desk can be contacted through the communication channels defined at national level. 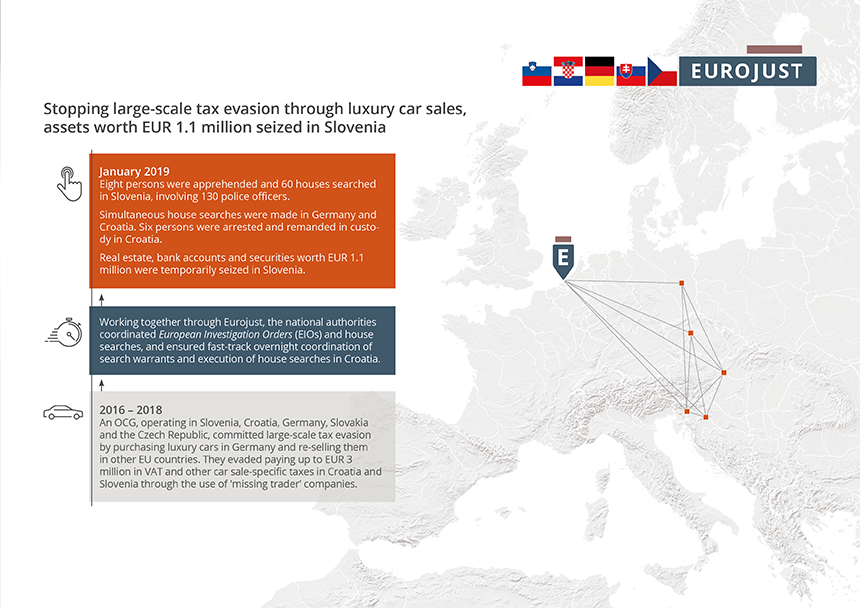