The Danish team is headed by Torben Thygesen, who is the Representative for Denmark since October 2022.

In 2021, the Danish team was involved in 98 new cases, 7 coordination meetings, and 8 joint investigation teams.

Mr Thygesen has been a prosecutor since 1998 and has worked at the Office of the State Prosecutor for several years. He has prosecuted many cases before the Western High Court of Denmark, including cases involving terrorism and serious and organised cross-border crime.

Alongside this, he is attached to and appointed as examiner at the faculty of law at Aarhus University and Copenhagen University.

Deputy to the Representative

Kirstine Troldborg is Deputy to the Representative of Denmark.

Assistant to the Representative

Sune Løvtrup is Assistant to the Representative of Denmark. He has been working for many years as a prosecutor in different districts of the Danish Prosecution Service, and, for the last few years, has been employed in the International Affairs Division at the Office of the Danish Director of Public Prosecutions. Alongside his position at the Director of Public Prosecutions, Sune Løvtrup has also tried cases before the Eastern High Court of Denmark on behalf of the State Prosecutor of Copenhagen.

The Agreement on Criminal Justice Cooperation concluded between Eurojust and the Kingdom of Denmark (DA) enables the parties to coordinate investigations and prosecutions during cross-border cases. The Agreement takes into account Denmark’s status as an EU Member State and a Schengen Area Country. Under the Agreement, Denmark may second a Representative, a Deputy and an Assistant to Eurojust to coordinate its criminal investigations and prosecutions with other Member States as well as third countries that have a cooperation agreement with Eurojust.

The Agreement provides for quick, safe and efficient exchange of case-related information and evidence between Denmark, other EU Member States and third countries, and contains extensive and robust data protection provisions to guarantee the same level of data protection that is observed throughout the European Union.

Each member of the Danish team is able to attend the Eurojust College meetings in the role of an observer without voting rights, as Denmark is affected by strategic and operational issues discussed in the College of Eurojust affecting all Member States. 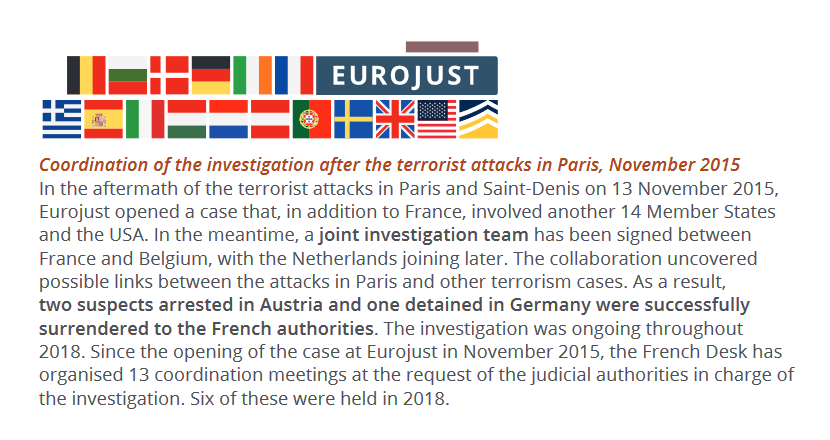