The Bulgarian Desk is headed by Ivanka Kotorova, who is the National Member for Bulgaria since February 2018.

Ivanka Kotorova was appointed National Member for Bulgaria in February 2018. She was Deputy National Member for Bulgaria at Eurojust between 2014 and 2018. Ms Kotorova is a prosecutor at the Supreme Cassation Prosecution, where she has more than 10 years of experience. Prior to joining Eurojust, she was Head of the international department at the Supreme Cassation Prosecutor’s Office of Bulgaria. Ms Kotorova obtained a Master’s Degree in international relations and European law from the University of Sofia and the universities of Strasbourg and Nancy in France. Prosecutor Kotorova is the National Correspondent and Contact Point for the European Judicial Network (EJN) as well as Contact Person for the EU network for asset confiscation. Her international experience includes participation as an expert in the 6th round of mutual evaluations of Denmark on the application of the Council Decision on Eurojust and the Council Decision on the EJN.

Victor Tartchev is the Deputy National Member for Bulgaria. He has been working as a public prosecutor since 2007, when he joined the Sofia Regional Prosecutors' Office. Specialised in cases involving EU fraud, economic and financial crime, Mr Tartchev led some of the most complex and high-profile prosecutions in the region. After receiving a promotion, in 2016 he moved to the Sofia City Prosecutors' Office, which specialises in international cooperation in criminal matters as well as in drug and sexual offences, aggravated robbery and murder. From 2018 to 2019, prior to his appointment at Eurojust, Mr Tartchev was seconded to the European Court of Human Rights. Since 2010, Mr Tartchev has been a member of the National Prosecutors' Network of Bulgaria, which is linked to the EJN. He has also been an EJN Tools Correspondent since 2016, an Association of Prosecutors (IAP) contact person since 2013, and was a former member of the managing board of the IAP in Bulgaria from 2013 to 2016, as well as a guest lecturer at the National Institute of Justice in Bulgaria.

Dimităr Hadzhiyski was appointed Assistant to the National Member of the Republic of Bulgaria in July 2012. Mr Hadzhiyski is a public prosecutor at the Sofia Regional Prosecutors' Office, and previously served as seconded National Expert to the Bulgarian Desk at Eurojust. Prior to his time at Eurojust, he worked as a junior public prosecutor at the Sofia City Prosecutor’s Office and as an intern in law at the District Court of Sofia. He is a contact point in the National Prosecutors' Network of Bulgaria, which is linked to the European Judicial Network in Criminal Matters. Mr Hadzhiyski is the chair of the International Commission of the Association of Prosecutors in Bulgaria, which in turn is a member of the International Association of Prosecutors.

What struck me right away about working at Eurojust is how easy it is to access every single country on the map, including countries outside the European Union and outside Europe. Before coming to Eurojust, I went through the European Judicial Network Contact Points. But the big difference is that here I can walk into another Member State’s office and see and speak to the people at the National Desks. Or interact directly with people during coordination meetings, for example. This is a major privilege and makes our organisation unique.

The case I have in mind is a bit of a strange case because it did not involve any coordination centres, coordination meetings or European Investigation Orders. It was a case involving two competing European Arrest Warrants (EAWs). At Eurojust, we can give national authorities advice on how to proceed with competing EAWs. A Bulgarian judge approached us for such advice. The court was faced with two competing EAWs issued by Poland and Romania for an Italian man who was renting cars in one country and then selling them in other countries after falsifying the documents and changing the licence plate numbers.

At the time, there were criminal proceedings against the suspect for similar crimes in Bulgaria, where he was being held, having been surrendered by the Czech authorities following a Bulgarian EAW. During the EAW hearing, the suspect told the Bulgarian authorities that he had already been convicted for the same or similar offences in Hungary and the Czech Republic and had served prison sentences in both countries.

So we invited the Czech, Hungarian, Polish and Romanian National Desks to a Level II meeting to share this new information and find a solution to this difficult situation. It turned out that the Romanian authorities were particularly keen to proceed with the case because the suspect worked with accomplices located in Romania, who were subject to a Romanian investigation.

A solution was first found by changing the Romanian EAW to include only those offences that had not been part of the Czech and Hungarian cases and would have caused a ne bis in idem situation if the suspect faced prosecution in Romania for the same offences. The Romanian authorities were also asked to request temporary surrender of the suspect, due to the ongoing Bulgarian investigation and an interest in prosecuting the suspect for alleged offences in Bulgaria.

There was a bit of a conflict of interest between Poland and Romania, and our colleagues from these two countries had to decide how to proceed. In the end, our Polish colleagues decided to withdraw their EAW, because many of the offences were committed in Romania and the Romanian EAW preceded the Polish one. However, as the Romanian EAW could not be changed, the Bulgarian court tried the suspect. The suspect was convicted, and the execution of the sentence was postponed for five years, allowing the Bulgarian court to subsequently execute the Romanian EAW. The suspect was surrendered to Romania only for those offences for which he had not been convicted previously.

I cannot imagine that we would have had this outcome without Eurojust’s support. The suspect probably would have been convicted a second time for the same offence in violation of ne bis in idem, an important human rights principle. The Bulgarian judge that initially approached us told us that at first she was not optimistic at all, but she was so happy with the outcome that she has approached us many times since and now promotes Eurojust to her colleagues.

The coordination meetings, but also the joint investigation teams (JITs). The coordination meetings are useful because you can discuss the possibility of setting up a JIT. Even now, during the corona crisis, we are negotiating a new JIT. JITs are important because they allow you to skip some of the formalities, such as investigation orders, and immediately collect important evidence just by picking up the phone or sending an email. Moreover, you can coordinate proceedings so that there is no overlap or conflict of interest.

I have been doing this work for 15 years and my country has been an EU Member State since 2007. So I know first-hand how difficult it is to coordinate parallel investigations without Eurojust’s support. There was frequent overlap before 2007. This happened once when we were investigating people who, as it turned out, were also important for an Italian investigation. And the Italians were collecting evidence that was important to our investigation. It was an unpleasant situation as well because information was leaked. So you can imagine how much damage can be done if you do not coordinate these investigations properly. That is why I consider the coordination meetings and JITs the most important tools at Eurojust. 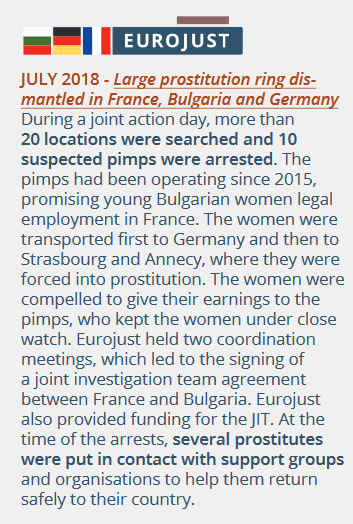