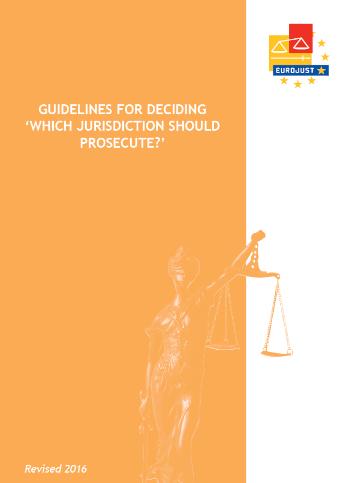 To help national authorities resolve cross-border conflicts of jurisdiction, Eurojust has created Guidelines for deciding ‘Which jurisdiction should prosecute?’. The Guidelines provide a checklist of the main factors to be taken into account when deciding the best jurisdiction to prosecute, and work as a shared starting point for the basis on which a decision can be reached.

Eurojust published the Guidelines because most Member States do not have set criteria for determining which jurisdiction should prosecute in the event of cross-border conflicts of jurisdiction, and due to the absence of an EU ‘horizontal’ legal instrument in this respect.

Following their original publication in 2003, the Guidelines were revised in 2016 to take into account developments in the EU Area of Freedom, Security and Justice, as well as the experience acquired by Eurojust during the intervening period. Since their revision, the Guidelines have been increasingly used in Eurojust casework (for example, in coordination meetings, joint recommendations and legal opinions) and widely disseminated to practitioners. They are available in all EU languages.

When deciding in which jurisdiction the proceedings should be concentrated, one of the preliminary key principles of the Guidelines is identifying which State or States offer the greatest prospect of success in achieving a successful prosecution and bringing the case to trial.

Furthermore, a number of other factors should be considered, all of them potentially affecting the final decision. The priority and weight that should be given to each factor will be different in each case. While territoriality – and, particularly, the location where the majority, or the most important part, of the criminal acts took place – remains an important factor, additional factors include: