Setting up of judicial counter-terrorism register at Eurojust

Eurojust's proposal to the EU Member States on the implementation and functioning of the European judicial counter-terrorism register on the basis of Council Decision 2005/671/JHA was presented to the national correspondents for terrorism at the annual Eurojust meeting on counter-terrorism. Following the initiative of France, Germany, Spain, Belgium, Italy, Luxembourg and the Netherlands, the setting up of the register was supported by the Special Committee on Terrorism of the European Parliament, whose Chair, Ms Nathalie Griesbeck, was present at the meeting. The proposal also received strong support from the European Commission and the EU Counter-Terrorism Coordinator (CTC).

The national experts agreed on practical steps in the implementation of the register, which will be launched on 1 September 2019. The register will centralise judicial information on counter-terrorism proceedings from all EU Member States. It will allow Eurojust to proactively support the national judicial authorities by identifying links between investigations and assisting Member States in coordinating more efficiently. Complementary to the criminal analysis carried out by Europol, the register will contribute to reinforcing the judicial response to terrorist threats in the EU Member States. 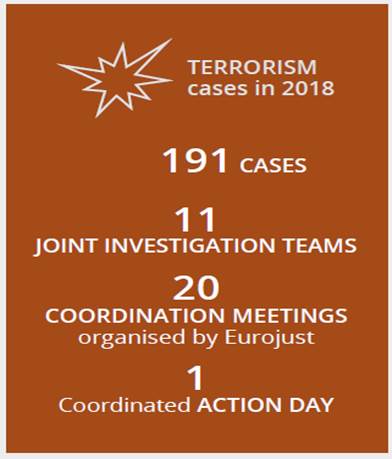 Mr Ladislav Hamran, President of Eurojust, said: 'To respond to the persistent terrorist threat that concerns the whole of the European territory, strong cooperation between judicial authorities within the European Union and beyond is required.  For Eurojust, the register is the first step in a broader endeavour to create tools that will lead to a fast, reliable and secure IT infrastructure called Digital Criminal Justice, which was first presented to the JHA Council in December last year. To face the new challenges posed by technological development and the evolving security threat landscape, prosecutors in the Member States need tools to interact efficiently with their counterparts, as well as with Eurojust.'

Mr Frédéric Baab, National Member for France and Head of the Counter-Terrorism Team at Eurojust, stated: 'After the terrorist attacks of 13 November 2015, the French Desk at Eurojust opened a case involving 14 Member States and the USA. In such a case, in which multilateral coordination is needed at EU level, a complete overview of all ongoing investigations in the countries involved is indispensable. For this reason, we worked on the implementation of a counter-terrorism register at Eurojust, which will centralise and cross-check this information and give feedback to the national authorities.'

Ms Nathalie Griesbeck, Chair of the Special Committee on Terrorism of the European Parliament, pointed out: 'Eurojust is a key actor in the reinforcement of our area of Justice and Security. As Chair of the special committee on terrorism, I am very happy to witness the progress made toward the creation of the European judicial counter-terrorism register. This concrete tool, which the European Parliament strongly supports, will foster the exchange of information and therefore help to make crucial links that could prevent attacks.'

During the two-day Eurojust meeting on counter-terrorism, the experts also exchanged experience and lessons learned in addressing extreme right- and left-wing groups in Europe. They concluded that the evolving threat from non-jihadist terrorism should not be underestimated and should be addressed efficiently at judicial level.

The participants also discussed how EU Member States and some third States deal with foreign terrorist fighters (FTFs) and their families, particularly those currently detained in Syria. They highlighted the benefits of sharing experience among the national authorities but also with Eurojust, Europol, the EU CTC and the European Commission.

This year's meeting was attended by judicial and law enforcement experts from various EU Member States, acting as national correspondents for Eurojust for counter-terrorism, the Liaison Prosecutors and national experts from North Macedonia, Norway, Switzerland, Ukraine and the USA, the EU CTC, the European Commission and the European Parliament, as well as Europol, Frontex and INTERPOL.