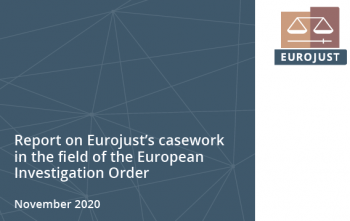 The Directive on the European Investigation Order (EIO DIR) was introduced to replace and improve the legal framework of mutual legal assistance (MLA). In many cases, the existence of standard forms (available in all EU languages), the increased role of judicial authorities (as issuing or validating authorities), the limited grounds for refusal and the time limits proved successful and had a positive impact on judicial cooperation. Yet, for the mutual recognition formula to be fully successful, it is crucial that the templates be duly filled in, the grounds for non-recognition be applied correctly and time limits be fully respected. This has not always been the case and, in practice, many practitioners have often struggled with the practical application of this instrument.

The aim of this report, which is complementary to previously published documents by Eurojust (and the European Judicial Network (EJN)), is to inform both practitioners and policymakers of the main difficulties encountered in the practical application of the European Investigation Order (EIO) on the basis of Eurojust’s casework and to highlight, where relevant, the role that Eurojust has played in overcoming such difficulties. The report is primarily based on the analysis of cases addressing issues related to the EIO registered at Eurojust between May 2017 and May 2019, and is complemented by views expressed during dedicated discussions with some Eurojust National Desks.

The report clearly indicates that the EIO is not yet functioning as a well-oiled machine. There are still several ongoing issues encountered throughout the life cycle of the EIO. Eurojust has played an important role in facilitating cooperation and ensuring coordination in both bilateral and multilateral cases involving EIOs. In the vast majority of cases handled by Eurojust, the issues mentioned throughout the report were resolved and EIOs could be executed successfully.